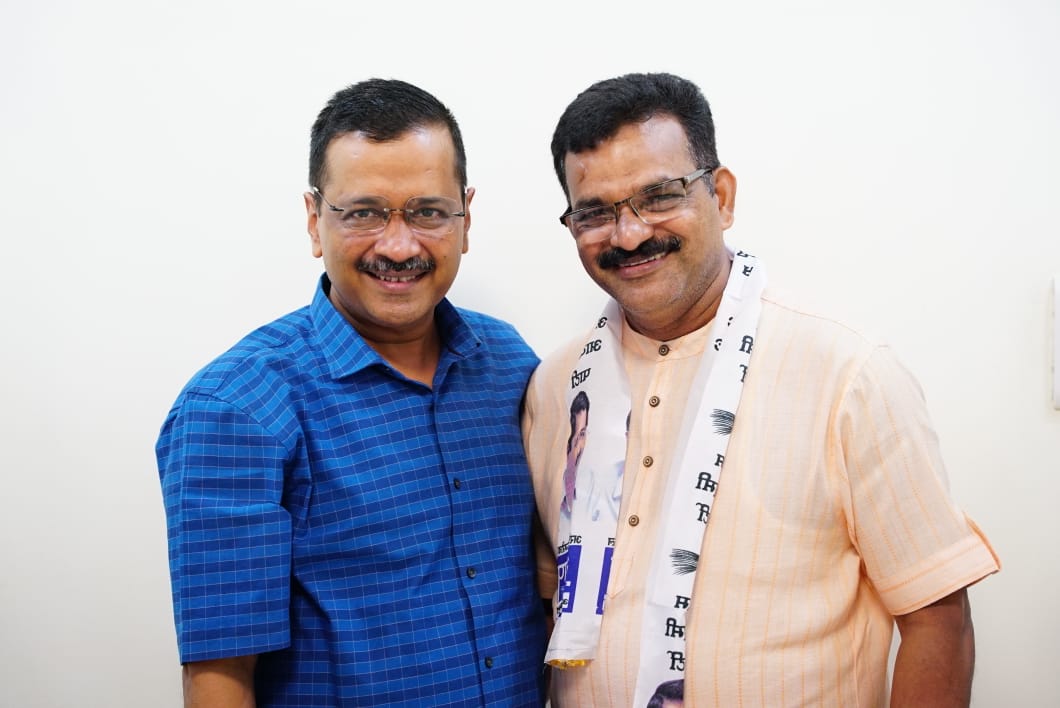 The Aam Aadmi Party got a shot in the arm with former BJP worker and ZP candidate from Sattari Taluka Ganpat Gaonkar joining the Aam Aadmi Party in the presence of Delhi CM Shri Arvind Kejriwal. He addressed his first press conference today in the presence of AAP Goa Convenor Rahul Mhambre and AAP Goa Vice President Valmiki Naik.
Gaonkar a former BJP and independent ZP candidate and also a former member of their North Goa District executive, is a practicing advocate since the last 20 years. He had been a BJP member for a period of 15 years before he quit in the year 2020 to contest the Zilla Parishad as an independent candidate. Gaonkar is a major force on land rights issues in Sattari since the year 1999 and has also participated in several land rights movements.He has been part of the struggles of the villagers of Saleli and the recent Meluli protests as well. He is also the director of the Sattari Taluka Farmers Co-operative Society since 2014

Gaonkar joined the party as he was impressed by Arvind Kejriwals vision for Goa and the Kejriwal model. As Sattari is one of the most poverty struck areas in Goa he knows first hand how Kejriwals Veej and Job Guarantee will help the residents who have been ignored by the father-son Rane Duo. Gaonkar informed that Pratap Singh Rane and Vishwajit Rane, the sitting MLAs have been fooling the people of Sattari since long. Hardly interested in the residents of the area they use strong arm tactics to fight any opposition. They are famous for forcing residents to travel all the way to their home in Miramar just to get any work done

“We have to end the dictatorship of the father son Rane Duo in Sattari, in the last 15 years no development activity has taken place in Sattari, due to which the situation has only deteriorated. They run Sattari, Valpoi and Poriem as if it is their personal fief. There are hardly any jobs due to which many families have come below the poverty line. The Rane duo give this to mostly their chamchas and anyone who objects is silenced” said Ganpat Gaonkar
He added. “They have become so arrogant, they done even bother to come out to meet the people who voted for them, but force people to come to their house in Miramar,” he said.
Shri Gaonkar stated that many people have lost jobs due to the pandemic. “The Rane family has been fooling the people in their constituency with the promise of government jobs. The AAP will put an end to this and ensure complete transparency when it comes to power, “he added.

“We welcome Ganpat Gaonkar to the party. His joining has strengthened our party further. More and more people are joining AAP today as they know only AAP can change Goa’s politics and provide hope to the youth” said AAP Goa Convenor Rahul Mhambre

Previous articleProposed garbage facility for MRF at Neura raises apprehensions
Next articleSunburn Goa on December 28, 29, 30, 2021 Only for fully vaccinated