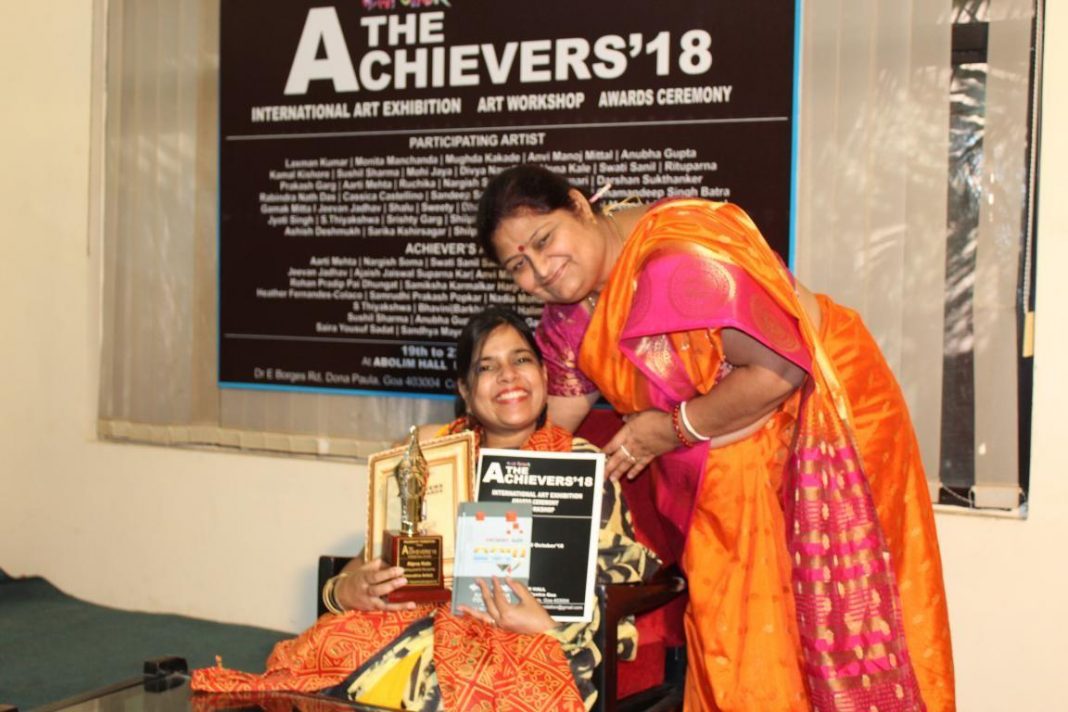 There is a saying, behind every successful man there is a woman, but in the case of Alpna it is the opposite, behind her success is her husband Pradeep.A girl from small town becomes a famous artist and is renowned across the country. Who would have thought this would happen, but for her mother. When Mrs. Rajni Agrawal named her daughter Alpna, which translates to rangoli, maybe she had an inkling of her child’s creativity and future as an artist, right from the beginning.

Alpna grew up in Meerut and studied in a convent, despite opposition from conventional minded relatives. She had complete support from her parents to study and pursue any hobbies she was interested in. She graduated in commerce in 2000 and her family shifted to Nasik.
She started studying Advance Diploma in Multimedia from Arena Multimedia, while also pursuing her masters. She got her first job offer there only and she happily accepted it. After a 1.5 year stint at Arena Multimedia, she tried her luck in the corporate world and moved to Mumbai, with the love of her life, her husband Pradeep. They were blessed with a baby boy soon after and Alpna decided to focus on raising him well. She quit her job but continued her studies. She started studying MBA in ICFAI.

She had a flair for art and craft since she was a kid, having done her first oil painting at the age of 10. She would tinker with new and different crafts over vacations. But over time she lost sight of her hobby as other things occupied her mind and time.
When she was not working and found some spare time while raising Yajat, her brother Anshul suggested starting a business making hand-made gifts. She was thrilled with the idea and her hubby supported her completely. That’s how her venture FEELINGS came into existence. The name is so simple, yet so capturing, it makes you think. Anytime you want to gift someone something, the first thing that you think of is how you feel about that person. So Feelings is quite an apt name for a custom made gifts business. She started out small, making greeting cards, advertised herself on Facebook and gradually orders started pouring in. She says everything inspires her to create her artworks, it can be a smile, flowers, waves and the list is endless… As Goa is a land of art and culture and also people here appreciate art so she and her husband decided to move to Goa so they could focus on their business and also not compromise on family time. Goa welcomed her with open arms and gave her the platform to showcase her art in exhibitions.

But like any other business, Feelings faced an order crunch in the beginning and Alpna had a bit of a hard time establishing herself as an artist. It’s a saying that “Difficult roads often lead to beautiful destinations”. Her family and friends have been a witness to the efforts she had taken in laying down the foundations for the business, the setbacks she had faced and difficulties she had overcome.

When asked what kept her going on despite setbacks, she said it’s the love people give for the work she has accomplished. She is also a bit of a thrill junkie who enjoys chasing deadlines and meeting goals. She believes in doing the best job she can for every person that approaches her, no matter the size of the order. Another thing that keeps her going is the people who keep coming back for more. She says it is even more satisfying than making a sale. You know you have established a relationship with the person, because when they come back, means they trust you to give them exactly what they want.
As her creations are made to express the feelings of the sender so it takes time to create them. Sometimes turn around time is one day whereas some creations takes more than a week. It’s completely depends on the requirement of the gift.

Alpna’s team is her family, Pradeep and Yajat, the two pillars that have supported her through it all. They have spent many a sleepless nights with her to meet deadlines.
In the future, she plans to have a studio of her own where she can design as well as provide training to people, especially women who are looking to become stable. She says, women are one of God’s most beautiful creations, so they need to merely believe in themselves and they can achieve anything they set their minds on.

For women out there who are struggling with anything in their lives she says, dare to be ambitious, take the chance, don’t settle and don’t let anything or anyone else define your worth. Do whatever you want as you can do a lot more than you believe you can.

Previous articleHC adjourns to November 26th  contempt petition over dumping of debris
Next articleDivya Navelcar …. Engineer turned into an artist