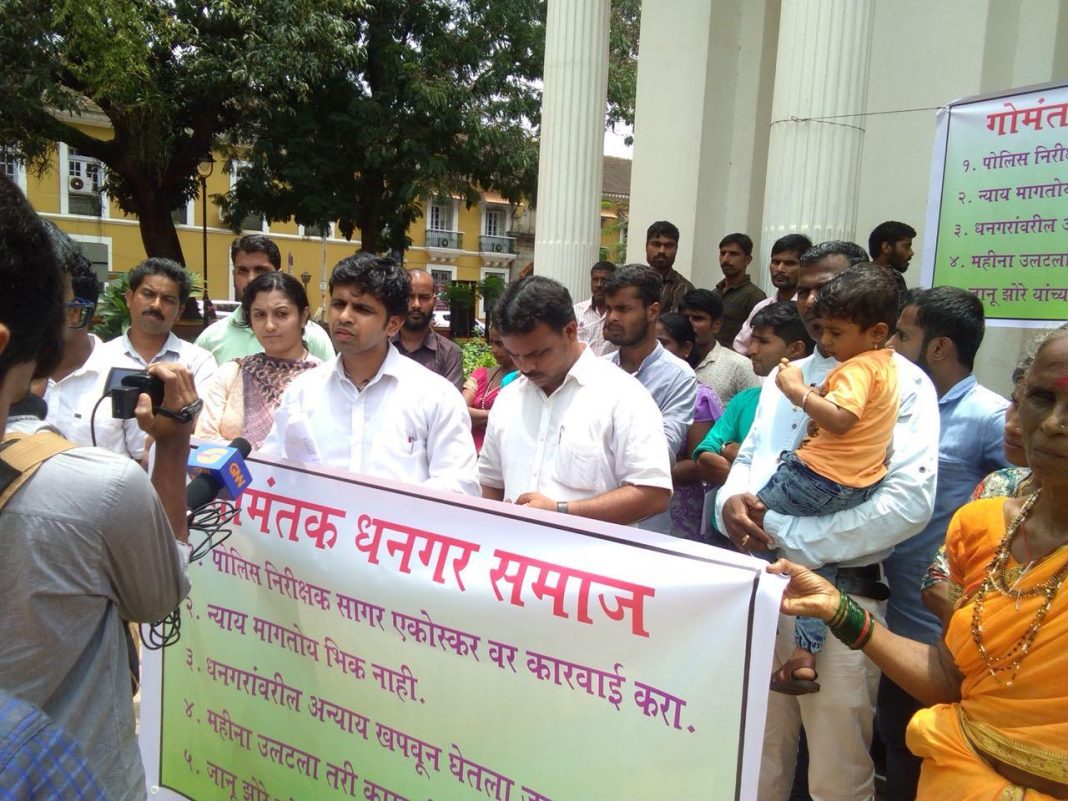 Shiv Sena’s Goa unit had given support to Dhanagar community members who had assembled in Panaji.

Around 100 members of Dhanagar Community today demonstrated at Azad Maidan before meeting Director General of Police Muktesh Chander. The community members were upset as no action has been taken on Ekoskar who had assaulted tribal youth Janu Zore on June 09, 2018.

“Janu Zore who was accompanying his brother to a police station in connection with the compromise worked out by Police Inspector Sagar Ekoskar was attacked inside the police station and even his cell phone was smashed,” he said.

“If you go by the eyewitnesses and evidences including the lawyer who was in the police Station, the entire attack was unprovoked. Janu was just present at the police station as a moral support to his brother and had not uttered a single word,” Rekdo said.

Zore who was present for the demonstration said that Ekoskar was firing bad words to which he had objected. “When I stopped him from giving bad words, he assaulted me and broke my cell phone,” he said.

“The attack was such severe that Janu had to be admitted in Hospicio Hospital for three days. There are medical reports to prove this claim,” said Shiv Sena Goa’s Vice President Rakhi Prabhudesai Naik.

She said that we would like to suggest that the attack would have been captured on the CCTV of Sanguem police station, had they been functional. Ekoskar has ensured that the CCTVs don’t function at police station so that all his misdeeds are kept hidden.

“His atrocities have become order of the day with the poor and uneducated people falling prey for his tactics. There are several instances in which he has been exposed beating people in the police station, undoing the position of a police officer and also threatening the citizens,” she added.

He has already been facing inquiry for assaulting Amit Naik who was wanted by Pune Court in connection with the summons issued against him. Naik was so badly beaten up that he was admitted in Goa Medical college and hospital for kidney problems and continued being there for next seven days.

Gomantak Dhanagar Samajonnati Mandal has demanded that an independent investigation should be conducted in the misdeeds of Ekoskar and pending inquiry he should be suspended. We are ready to provide all the necessary documents and witnesses to support our claim against Ekoskar.

“We humbly request you that if top police officers continue ignoring the acts of Ekoskar, some day, there would be a big incident like custodial death in Sanguem police station which will bring bad repute to the entire force,” they have said in a memorandum.