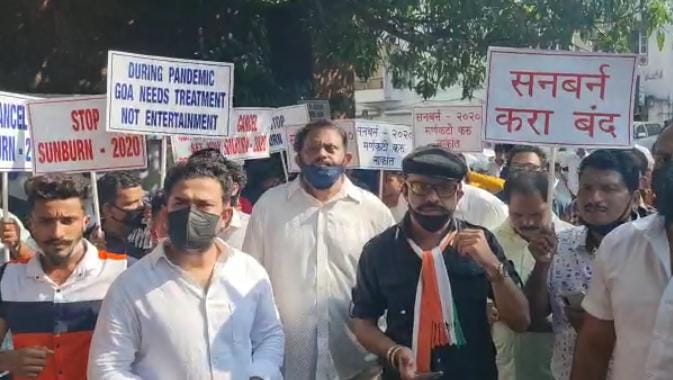 Panaji:  While the Congress party on Friday protested against the hosting of Sunburn EDM festival, which is scheduled to be held in the coastal state during last week of December, the State Health Minister Vishwajit Rane said that the people can participate in the event after following all the protocols.

Congress leaders held demonstrations outside a starred hotel in Panaji on Friday afternoon where the organizers of Sunburn festival were supposed to address their press conference.

Goa Congress Spokesman Sankulp Amonkar demanded that the festival should be cancelled, as it could be a potential spot for COVID-19 outbreak in the state. “People have stayed indoors and protected themselves from COVID-19 all this time. The number of COVID-19 positive cases also continue to be reported during the testing in Goa,” he said adding that hosting of such festivals would result in the spike in the numbers, affecting everyone in the state.

“Don’t expect people to participate in Sunburn with their mask on or maintaining social distancing. We all know what happens at such kind of festivals,” he said.

Meanwhile, State Health Minister Vishwajit Rane, talking to reporters after chairing the Experts’ Committee meeting on COVID-19, said “you can go for such events but go with face shields, masks and hand gloves.” 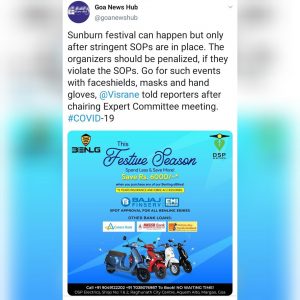 “I will definitely request the Chief Minister to impose stringent SOPs for the festival and there should be a clause that if organizers allow the protocols to be violated, they should be penalized severely,” the minister said.

State Tourism department has given permission for hosting Sunburn at Vagator village in North Goa from December 27-28.