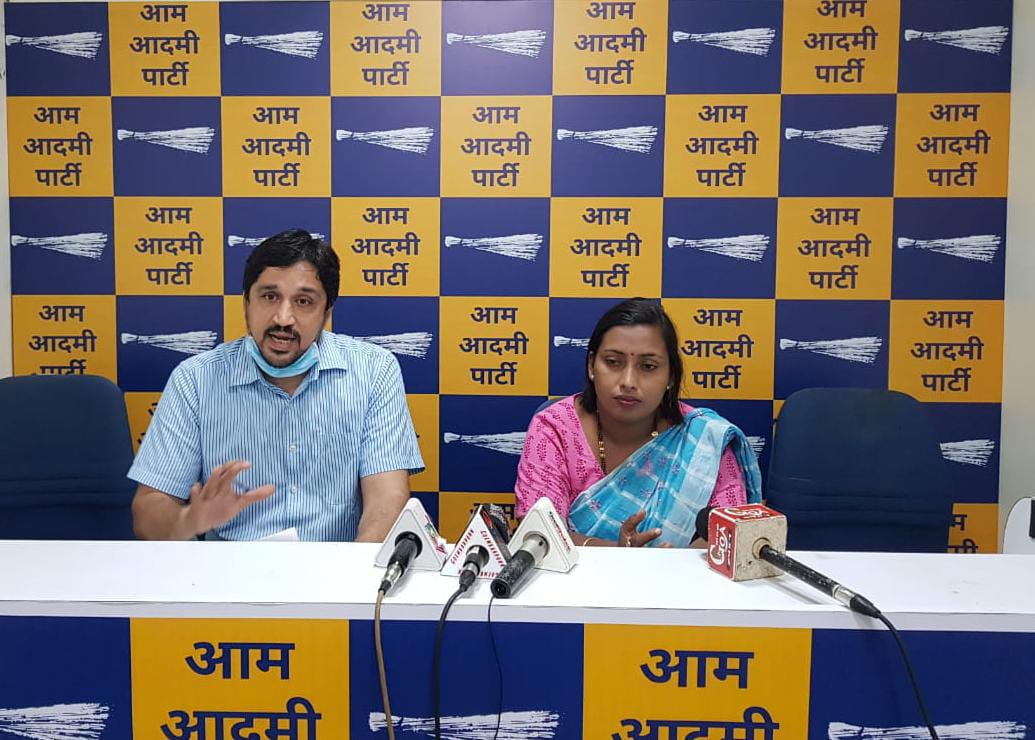 Panaji: Speaking to the Press today, AAP spokesperson Valmiki Naik with AAP leader Adv Sushma Gaude today punctured these claims and asked the BJP to stop misleading Goenkars in the name of politics.

Aam Aadmi Party has said it is a sign of fear in the BJP that it is bringing national leaders to Goa to spread propaganda and lies against AAP. Referring to the visit of Vanathi Srinivasan who is the National President of BJP’s Women’s Wing, AAP’s mahila leader from Priol, Adv. Sushma Vantekar-Gaude, said that BJP is using its Mahila Morcha to mislead women of Goa.

The BJP Mahila Morcha President Vanathi Srinivasan very purposefully avoided talking about the ground realities of Goa where women are not getting Grihaadhar payments, lack adequate public transport, women para teachers are forced to come on the streets for their jobs and most importantly she was silent on Pramod Sawant’s disgusting statements blaming the minor victims of the Benaulim rape case. Statements that brought national shame to Goenkars.

The Aam Aadmi Party in it’s tenure has increased its budget from 30,000 crores in its first year to 69,000 crores for FY 2021-22. This has been due to an increase in revenue, infact the CAG has hailed AAP’s fiscal measures and growth in budget. The Kejriwal Govt by filling up leakages and ending corruption is the only party that has been able to ensure projects are completed without escalating costs, which is more than anyone can say about the BJP in Goa. This increase in budget has led to an increase in investment in education amongst other basic necessities.

The BJP would do well to understand that AAP’s revolution in Education has been recognised both nationally and internationally. In India it has been none other than the BJP’s own Central Govt that has recognised AAP. The moniker of Finest Education minister was given to Manish Sisodia by none other than the President of India.Various states in India have also been in touch with the AAP Govt to replicate the AAP educational model. On the international front when the First Lady of the USA Melania Trump visited India, she visited a Delhi Govt school built by Arvind Kejriwal not a school built by the BJP. Apart from this AAP’s E-Learning program is being adopted both nationally and internationally.

On the other hand Pramod Sawant is responsible for the mass shutting down of Govt schools across Goa. Overseeing a catastrophic failure of adopting E-learning with students not having adequate devices or network especially in rural parts of the state. Many schools are in a state of disrepair and just last week the Govt announced that they have shut down 92 primary schools across the state!

“Srinivasan was utterly silent on women safety in Goa. Why did she not utter even a single word on Pramod Sawant’s shameful comments and victim blaming of the minor Benaulim victims & their family? said Adv Sushma Gaude AAP Leader. As a former secretary of BJP’s Mahila Morcha in Priol, I know how the women’s wing is only misused for politics. For example, when Babush Monserrate contested elections on the Congress ticket, the Mahila Morcha warned that Panaji’s women would not be safe if he became MLA. But the same Mahila Morcha is silent now that Babush defected to the BJP. The silence of the BJP’s Mahila Morcha on the CM’s recent statement on the Benaulim rape incident was deafening. It is time for women all over Goa to think whether they are safe under a BJP Govt” added Gaude

“Pramod Sawant’s record on the education portfolio is like an absentee student who has failed his exams,” said Valmiki Naik AAP Spokesperson. “Delhi’s education minister Manish Sisodia has been adjudged as the “Finest Education Minister” in the country by none other than the President of India. AAP’s education model has been sought after by various state Govts in India, including Maharashtra, Jharkhand, Karnataka, Uttarakhand, Odisha Meghalaya etc. Even when President Trump visited India, the First Lady Melania Trump asked to visit a Delhi Govt school of which she had heard a lot about. Apart from this, AAP’s E-Learning curriculum during covid was adopted by 20 countries across the world”, Naik said.

“Pramod Sawant and BJP is No. 1 only in shutting down Govt schools across Goa, with almost 100 primary schools closing in just the past 5 years. Naik said Sawant was also responsible for the catastrophic failure in adopting E-learning with students not having adequate devices or network especially in rural parts of the state.” added Naik

“The school infrastructure is Goa is pathetic – everyone has seen the viral photo of students sitting with an umbrella inside a Govt school classroom during monsoon – and everyone avoids Govt schools because of the lack of basic facilities. Pramod Sawant’s record on the education portfolio is like an absentee student, who has failed miserably in his performance. How can he with a straight face claim to be No. 1 in education. All that Sawant has done is taken credit for private Govt-aided schools where the Govt just helps in Salaries”, said Naik.

“We however welcome Sawant making education an issue and invite him to have a debate on the Kejriwal Vs Sawant model of education with our Education Minister Manish Sisodia. Like Cabral let him justify his claims so that all Goenkars can see!” stated Naik

Previous articleDon’t Misguide taxi operators : Mauvin Godinho
Next article103 new infections,  none died  due to covid-19 in Goa on Wednesday