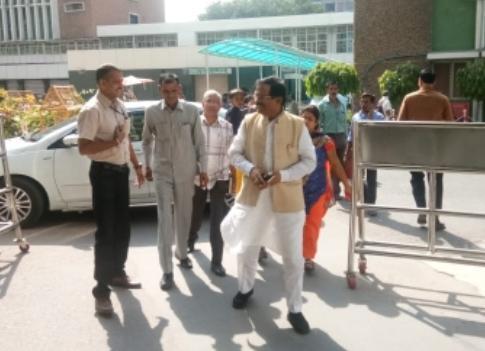 Panaji: Union AYUSH minister Shripad Naik who met Goa Chief Minister Manohar Parrikar at AIIMS in Delhi on Friday said that the latter is expected to return to the State during Diwali.

Naik was a part of BJP Goa Core Committee which met Parrikar at All India Institute of Medical Sciences in New Delhi. BJP Goa Unit President and Rajya Sabha member of Parliament Vinay Tendulkar was also present for the meeting.

“We took review of the governance in Goa during the meeting. Chief Minister is expected to return to Goa from AIIMS during Diwali,” he said over phone from Delhi after meeting the CM.

Naik said that the issue about allocation of additional portfolios to the cabinet ministers was also discussed during the meeting.

“There was no discussion about leadership change. Parrikar will continue to be the chief minister and he is recovering,” the minister said.

Tendulkar said that the Parrikar discussed about the party organizational works in the State. “We also inquired about health of the chief minister,” he said.

Tendulkar said that the CM will hold meeting with alliance partners to discuss about the portfolio allocation.

The alliance partners including Goa Forward Party, Maharashtrawadi Gomantak Party and three Independents supporting the government will be meeting CM later during the day.

Parrikar, 62,is currently being treated for his pancreatic ailment at AIIMS since lat month.