BJP by its Dadagiri has stamped on democratic value: Chodankar 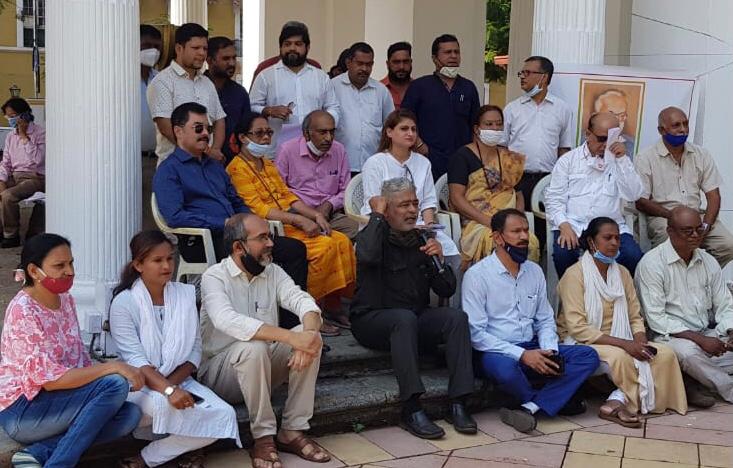 Panaji: The Goa Pradesh Congress Committee President Girish Chodankar on Saturday stated that BJP by its Dadagiri has stamped on democratic values and they have proved it with the incident of elderly woman in Shell-Mellauli, who was stamped on chest by police.

“people of Goa will not forgive this BJP government and BJP Party for this.” He said.

Chodankar was speaking during a protest organized by T. B. Cunha People’s Movement for Social Justice on the occasion of Opinion Poll Day at Azad Maidan-Panaji.

He said that this BJP government is not ready to listen to thoughts, opinion, voice and people rights, but imposes its own rules.

“In 2017 assembly election Goans had shown them their place by sending their former Chief Minister and other Minister at home (by defeating), but by misusing the office of President, office of Governor and money power they imposed their rule on Goans by forming government. Goans would have forgiven them for forming government by going against the wishes of people, had they done any welfare of people.” Chodankar said.

“But today people will not forgive this government and BJP for their misdeeds. They have not only done stamped on chest of elderly woman in Shell-Mellauli, but they have also stamped on democratic value by forming government against opinion of people.” He said.

“Opinion poll day reminds us that all the non-BJP governments in the state have always respected the opinion of people.” He said.

He also said that after the Goa liberation , some influential leaders from Maharashtra were in the favor of merging Goa into their state, but then Congress government at center respected people and gave freedom to conduct opinion poll.

“Then Congress leadership gave freedom to people to choose their wish and then as per peoples wish identity of Goa was protected.” He said.

“In regards to land at Shel Melauli, it belongs to people residing there from generations to generations. But this BJP government has grabbed this land for IIT project illegally.” He said.

“Today people’s power compelled this BJP government to stoop down before them. Today Shel-Melauli is dadagiri mukt.” He said.

Previous articleRSS leader Deendayal Upadhaya wanted merger of Goa, it would have become reality if BJP was in power: Chodankar
Next article51st IFFI’s opening film Denmark’s Oscar entry ‘Another Round’ to be screened today