Ban on the sale of PoP Ganesh idols and to encourage idols made of Shadu clay: HJS 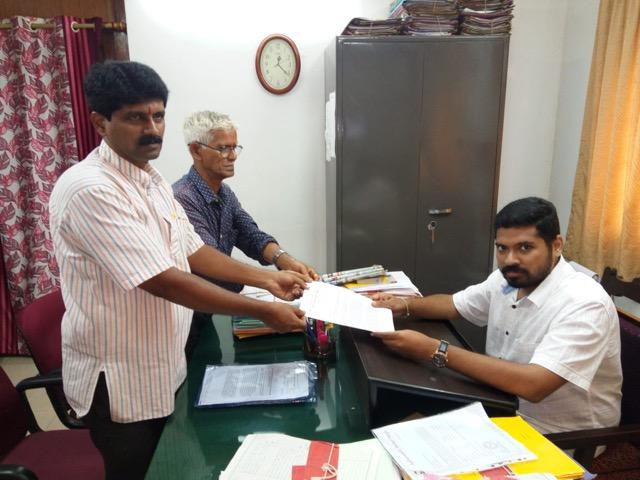 Panaji: The Hindu Janajagruti Samiti (HJS) has appealed to various administrative officers to impose a complete ban on the sale of PoP Ganesh idols and to encourage idols made of Shadu clay in the State. HJS has handed over a memorandum in this regard to the North Goa Additional Collector Vikas Gaunekar, Dy Collector (incharge) of Mapusa Glen Madera and Dy Collector of Ponda Vishal Kundaiker.

Memorandum further says that, this year, Sree Ganesh Chaturthi is going to be celebrated on 13th September. In spite of ban on sale of PoP idols it is found that PoP idols are available for sale in some parts of the State before Ganesh festival.

Also it is found that PoP idols with outer finishing of clay are also sold in the market. It has been observed that this idols float in water after immersion. We request you to impose a complete ban on the sale of PoP Ganesh idols strictly, also to encourage idols made of Shadu clay in order to enable the worshipper to obtain maximum spiritual benefit and blessings of the deity.

PoP idols with outer finishing of clay should also be banned in the state. As per the Science of Spirituality, Sree Ganesh idols made of Shadu clay or mud attract the deity’s principle optimally.

Nowadays, idols are made from Plaster of Paris so that they become light weight and more attractive. There is a difference between idols made from mud and plaster of Paris.

There are references in the Purans (mythological texts) that Ganapati was created from grime. Hence it is appropriate to use a Ganesh idol made of Shaduclay for ritualistic worship. The pure spiritual particles (pavitraks) of Ganapati get attracted to a greater extent towards an idol made of Shadu than to that made of plaster of Paris.

The government can promote environment friendly Ganesh idols by encouraging sale of Ganesh idols made of Shadu clay.

Presently, Shadu clay idols are not being made in large quantities due to high manufacturing cost. If the government provides subsidy for Shadu clay idols, it will facilitate purchase of the same by the common man. So also, providing Shadu clay at subsidized rates will help the idol makers (Murtikars). We also wish to bring to your notice that nowadays, Sree Ganesh idols made of paper pulp are sold as an eco-friendly initiative.

This is against the Science of Spirituality; also the paper pulp causes water pollution and the colours used therein cause chemical pollution. In contrast, the idols made ofShadu clay do not cause any environmental pollution.