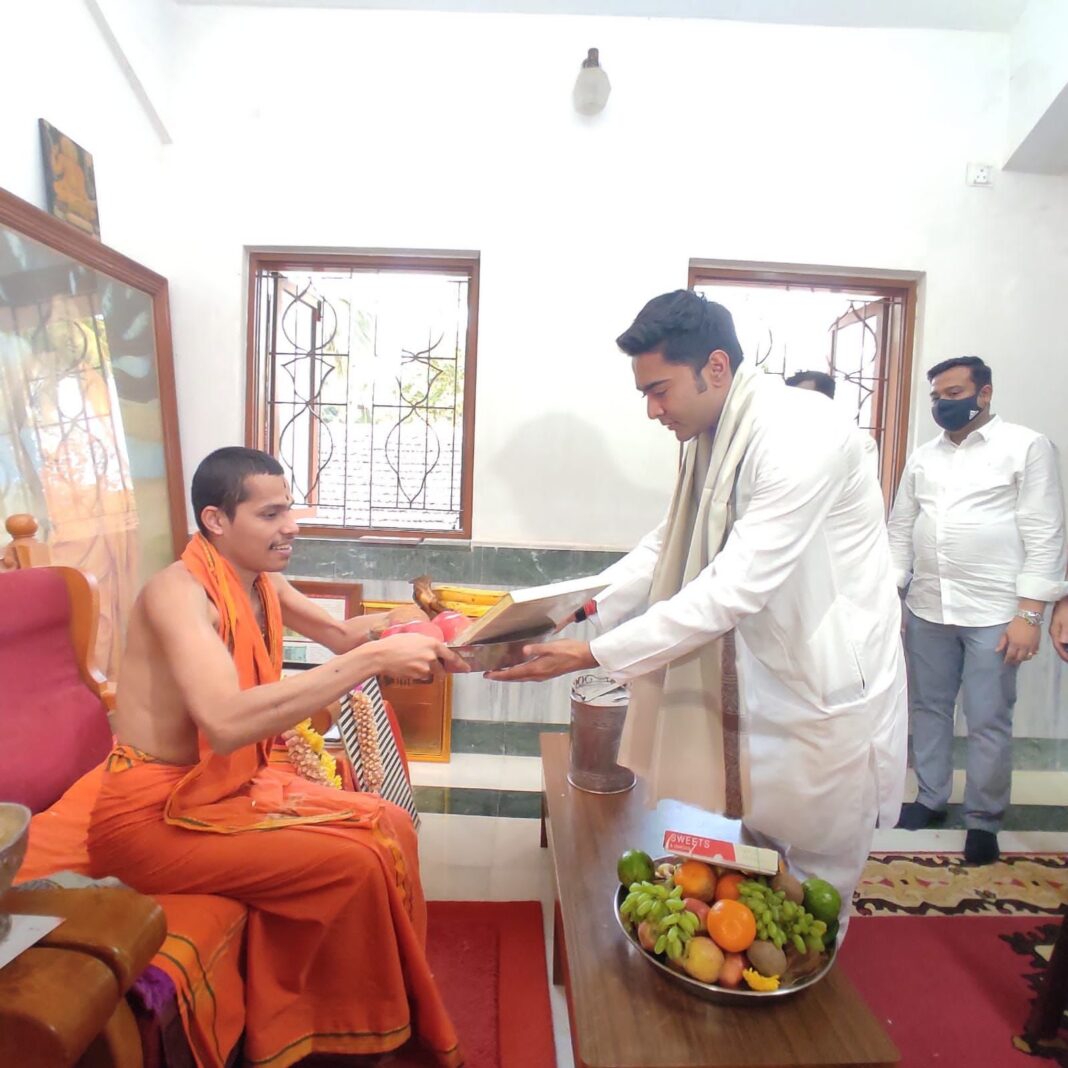 All India Trinamool Congress (AITC) National General Secretary Shri Abhishek Banerjee began his two-day trip to Goa by paying a visit to the revered Rudreshwar Temple in Sanquelim today which was followed by a visit to Shri Samsthan Gokarn Partagali Jeevottam Math in Canacona.

At the Rudreshwar Temple, Shri Abhishek Banerjee performed Hindu rituals and offered prayers in the presence of the priest, and thanked the temple committee for the opportunity to offer his obeisance to the revered Hindu god Mahadev. When asked about his religious visit, he said that as a proud Hindu, his visit to the temple was motivated by a spiritual longing to offer prayers for peace, and progress of the citizens of Goa.

Shri Abhishek Banerjee added that he was visiting the temple as a common citizen, at best a devotee seeking blessings for the prosperity of Goa.

As a fervent devotee of Lord Mahadev, Shri Abhishek Banerjee spoke of maintaining peace and brotherhood, and warned Goans of ‘divisive forces’ that were desperately trying to tear down the secular fabric of the state by mixing religion with politics.

When asked about TMC’s election campaign within the temple premises, he said that politics and religion should be kept separate. He further remarked, ‘It is our Faith that brings us here. I pray that we keep this fraternity, peace and unity, that is the rich multi-cultural legacy of Goa intact.’

Hours later, AITC National General Secretary Shri Abhishek Banerjee met and discussed the issues of Goa with His Holiness Shreemad Vidyadheesh Teerth Shreepad Vader Swamiji at Shri Samsthan Gokarn Partagali Jeevottam Math. They both had a detailed discussion on TMC’s flagship scheme called Griha Laxmi and its feasibility in Goa. The discussion also revolved around the future of the youth in Goa and initiatives that can propel prosperity in the state.

After seeking Swamiji’s blessings, Shri Abhishek Banerjee interacted with women who had come to register themselves for the Griha Laxmi card and promised them that if the TMC comes to power, the party would implement this flagship scheme within 2 months.

His overarching message to all Goans was that TMC is one party that does not know how to go back on its words.