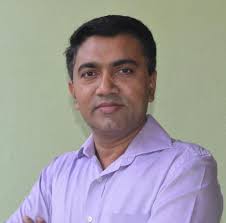 Adv. Aires Rodrigues has today made a written request the Goa Lokayukta Justice P.K.Misra to suo-motu probe in public interest the huge wealth allegedly acquired by the Pramod Sawant who is now the incumbent Chief Minister.

Adv. Rodrigues has placed before the Lokayukta a copy of the documents obtained by him from the Anti- Corruption Branch (ACB) under the Right to Information Act pertaining to the 20th February 2017 complaint filed by Sudip Tamhankar against Pramod Sawant the then Chairman of Goa State Infrastructure Development Corporation (GSIDC) alleging him of having acquired disproportionate assets, cheating, criminal breach of trust and criminal conspiracy.

Adv. Rodrigues in his letter has drawn the attention of the Lokayukta that a mere perusal of the noting sheets processing the complaint against Pramod Sawant demonstrates that the ACB which has been hounding Opposition politicians had on directions of then Chief Minister Manohar Parrikar shielded Pramod Sawant from a probe.

Adv. Rodrigues has told the Lokayukta that the complaint against Pramod Sawant having been documented, the ACB was duty bound to probe it even if the Complainant Sudip Tamhankar did not respond to the summons sent to him.

Former Chief Minister Manohar Parrikar on 16th June 2018 while he was ailing gave his consent to close without conducting a probe the disproportionate assets complaint that was filed by Sudip Tamhankar against Pramod Sawant.

In that documented complaint, Pramod Sawant was accused of buying properties in the name of a partnership firm M/s Jay Ganesh Developers and Associates set up by him in 2014 as a front with Ranjit Rohidas Mangaonkar, Rupesh Narayan Thanekar and Rajesh Manohar Shirodkar as the other three partners.

In the complaint the ACB was given details of 24 Sale deeds executed within a span of two years by Pramod Sawant’s partnership firm at the office of the Sub- Registrar in Bicholim.

Amongst the properties purchased by Pramod Sawant’s partnership firm was land admeasuring 16,480 sq mts in Bordem at Bicholim for Rs 1,31,84,000 ( one crore thirty one lakhs and eighty four thousand ) and another 19,989 sq mts also at Bordem for an amount of Rs 1,23,34,000 (one crore twenty three lakhs and thirty four thousand).

In the complaint the attention of the ACB was drawn that in his nomination at the 2012 Assembly elections Pramod Sawant had stated that his total income for 2010-2011 was only Rs 4,51,653 and his savings including FD’s was a mere Rs 55, 139.

On receipt of the complaint the ACB placed it before Chief Minister Manohar Parrikar who directed that the complaint be first verified if it’s genuine by sending a registered AD letter to Sudip Tamhankar to ascertain whether he had infact sent the complaint.