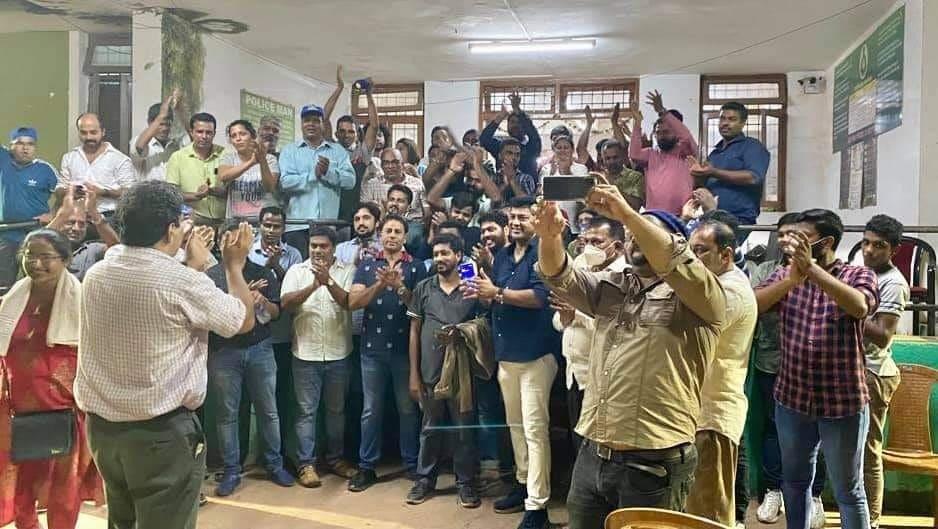 When 800 AAP volunteers led by Aam Aadmi Party’s Goa leadership took out a protest demanding the resignation of Pramod Sawant the entire BJP establishment was shaken up. While other parties stuck to tame delegations and namesake protests the AAP protest stunned in both size and intensity against the BJP’s government’s corrupt practices. A protest of such magnitude and at such a short notice was not heard of Goa. The reason? The people of Goa were equally disillusioned by the other parties as well. But now, things have started changing. Over the past month a large number of Goans have seen that there is an alternative to the BJP and Congress and that alternative is AAP

All of Goa was shaken on Monday night when on Prime Time TV Former Goa Governor Satyapal Malik revealed that there was massive corruption in the BJP Goa Govt. What was worse was that this came right from the mouth of a BJP leader! He elaborated that during the lockdown the Govt refused to let shops serving essential supplies be open because a certain company had bribed them to get a contract to deliver food door to door. Shockingly despite escalating the issue to the PM no action was taken. Talking about how Corona spread he said trucks near the airport transporting mining materials continued to do so even after he requested the Govt to stop them leading to an increase in Corona in those locations.
There was immediate outcry as finally someone from the BJP ecosystem had belled the cat on Pramod Sawant’s failures. It was now clear that it was greed that led to the deaths of so many Goenkars. AAP immediately made a call for a massive protest and on 2pm at Azad Maidan just hours after the call 800 people turned up. Leaders and volunteers from every constituency in Goa turned up with a singular goal: “Resign Pramod Sawant”. This huge show of force shocked the political establishment in Goa both in power and opposition alike. The shaken Sawant Sarkar so used to dealing with opposition as business as usual found out that they could not silence AAP. Therefore they decided to intimidate them.
The Sawant Sarkars police force fell down on AAP’s peaceful protesters with all their brute strength manhandling volunteers male and female alike. In their zeal to protect the corrupt Sawant Govt AAP volunteers were brutalised and shoved into police vans to be illegally detained. The Sawant Govt was in for a rude shock if they thought this would stop the AAP volunteers. Videos immediately went viral of AAP volunteers cheerfully singing songs in the Police Van on their way to the Agacaim police station and AAP Vice President uploaded a selfie of a determined AAP team ready to take what ever Sawant could throw at them. At the police station the party leadership was given an ultimatum, either promise to not take out any protests or be denied bail. A stern Rahul Mhambre AAP Goa’s Convenor announced to the media that they will never sign such a document as the party will not relent till Sawant was shown the door! He then led the arrested leaders and party volunteers on a Gandhian Satyagraha where the police station was taken over by patriotic songs from India’s freedom struggle including Gandhis favorite Raghupati-Raghav & cries of Pramod Sawant Resign. The police were in for a long night.

If the Sawant Sarkar thought putting the Party’s top leadership behind bars would rid them of their problems they were in for a rude shock. Party volunteers from all over the state started descending on the Agacaim police station some even joining in on the singing from outside the police stations as chants of “We shall Overcome” and “Resign Pramod Sawant” now could be heard both from inside and outside the police station. Police officials who came out to meet volunteers were asked firmly “Is it a crime to protest corruption?”. Volunteers also cross questioned the police for trying to force the party to issue a statement that it would not take out such a protest again. Images of these soon began circulating in social media as media channels documented this entire process. Finally as the hour got late both volunteers and leaders settled in for what they thought was a night of resistance. But faced with a dedicated AAP volunteer base and leadership and increasing public pressure the police finally relented and let out the protesters at 1 am to a triumphant yell from AAP’s volunteers outside.

“We want to tell Pramod Sawant that he cannot cow us. He cannot scare us and he cannot intimidate us. AAP will not rest until he has resigned” said Rahul Mhambre AAP Goa Convenor.
“Today we are fighting for every Goenkar who has lost someone during the pandemic. For every Goenkar who is shocked by the sheer greed of the Sawant Sarkar” said Adv Pratima Coutinho AAP Goa Vice President.

“Pramod Sawant has not moral right to continue as CM of Goa after the truth behind his corruption has come to light. AAP will not stop till he resigns” said AAP Taleigao Assembly incharge and National Youth Vice President Cecille Rodrigues
“Goenkars will never forgive Sawant nor the MLAs who out of their greed sold out Goa at its time of need” said AAP Goa Vice President Venzy Viegas.

AAP has stuck to it’s guns and still not relented. As of printing their Youth wing took out another protest demanding Pramod Sawant’s resignation at Panaji KTC Bus Stand today.