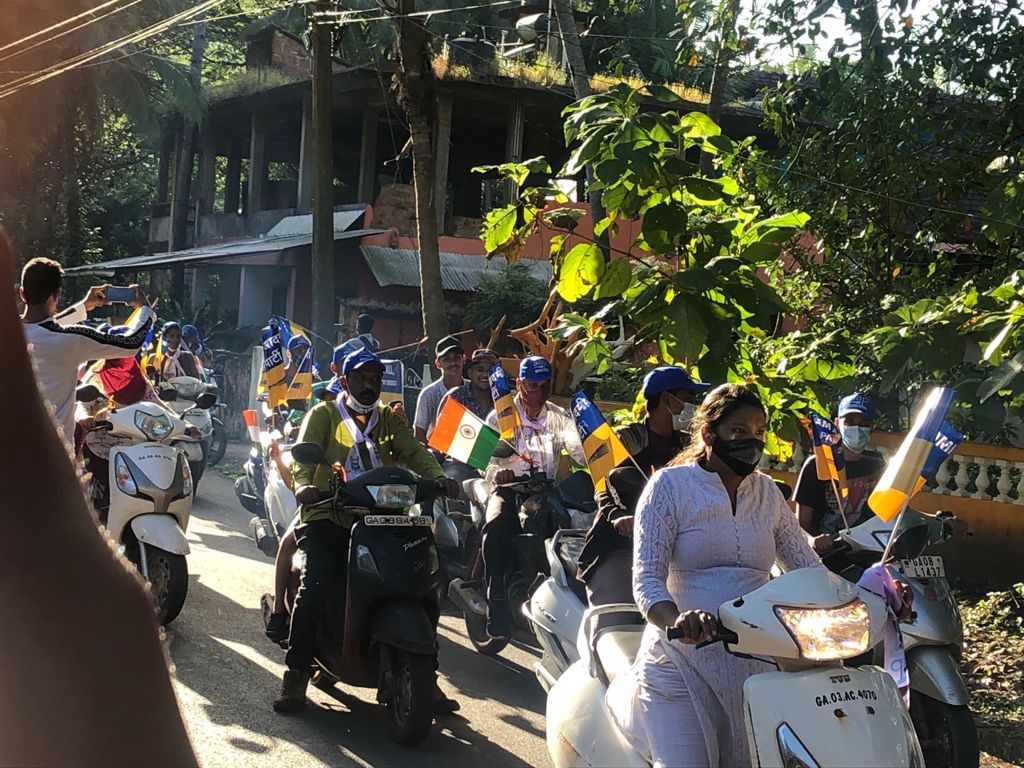 The Aam Aadmi Party launched its Rozgar Yatra in the state today with a set of meetings in Navelim South Goa. The meetings were attended by 100s of residents as the party took Arvind Kejriwals Job Guarantee to the ground. This inaugurated a unique campaign in Goa as it is the first time any political party has taken the issue of employment to the ground practically to the homes of every Goenkar. The meetings were preceded with a series of corner meetings and aggressive door to door campaigning where AAP volunteers explained to residents Arvind Kejriwal’s Job guarantee

Last month Arvind Kejriwal had come to Goa and announced his guarantee of providing employment to every youth if the Aam Aadmi Party government is formed in the state. He said that every youth will be given employment after the formation of the AAP government and till the employment is not provided, one youth of every family will be given Rs 3,000 per month. He announced that 80 percent of jobs in the private sector will be reserved for the youth of Goa. Rs 5,000 would be provided monthly to families who lost employment due to shutdown of tourism and mining. AAP Government will further establish a Skill University in Goa on the lines of Delhi’s DSEU. He further said that AAP will bring an end to nepotism in government jobs in Goa and the jobs will be made available to the common man.
Today the AAP started taking this guarantee to all Goa. Many Goenkars want to know more about the Kejriwal model of Employment as they are already impressed by the Kejriwal model of electricity, school and healthcare amongst other things. The Aam Aadmi Party in Goa has been aggressively reaching out to the grassroots where Goenkars are welcoming the Kejriwal model as the only alternative in Goa for the future. Goan youth are tired of being cheated of jobs and are excited that AAP will bring transparency to the recruitment process. Residents were heartened by the support of INR 3000 that AAP will give to the family of unemployed Youth and compared this to how the Sawant Sarkar has failed the same.
Youth who attended the meeting asked questions about the skill university and how it functions in Delhi. Many of them were worried of not being able to compete in the job market as the Sawant Sarkar’s syllabuses have ignored any employable skills. Just yesterday a UNESCO report stated that most of Goa’s schools don’t even have computer labs.
“The residents of Navelim are fed up with the BJP and Congress. They are Fed up of the corruption and nepotism that has crept into the creation of jobs in Goa.” said Adv Pratima Coutinho AAP Goa Vice President. “All Goenkars know only AAP can provide a hope for the future and that’s why they came in large numbers to our meeting” added Coutinho