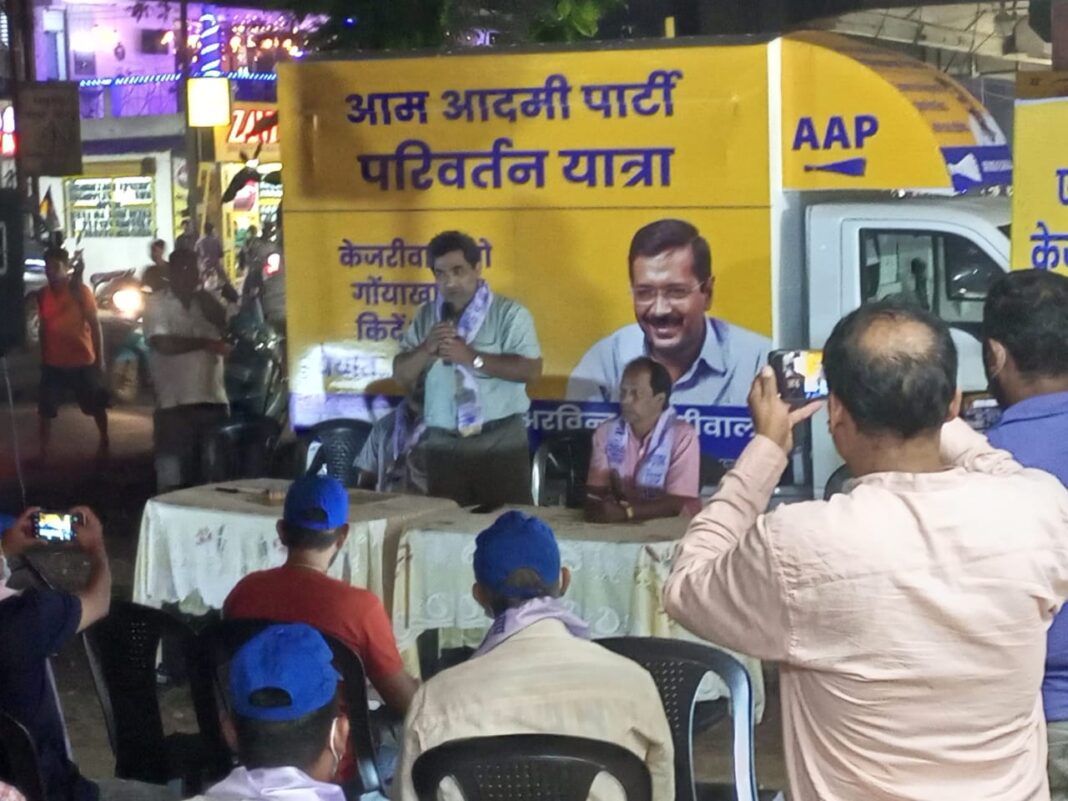 Aam Aadmi Party launched its ‘Parivartan Yatra’ campaign at Dabolim and Calangute on Friday, further boosting its election campaign in the state.

While addressing people during Parivartan Yatra AAP leader Babu Nanoskar said, “Over the last 10 years, there has been no development in Dabolim. Those who wanted to sideline the BJP, sided with the Congress. However, ten of the 15 MLAs joined the BJP later on. I have been doing door-to-door campaigning recently and have seen that people are angry over high electricity and water bills, and everyone is asking for employment. Therefore, I appeal to people to give a chance to AAP, and every issue will be resolved.”

In Dabolim, the Parivartan Yatra received overwhelming response. The people expressed their frustration about high water and electricity bills. A woman said, “We used to get water bills around 100 rupees. Now, we pay 700 rupees”.

Nanoskar further said, “When AAP comes to power, people will not need to visit government offices; instead, government workers will come to your home and do your work. From the past five years, Delhi residents have not been receiving electricity bills, and their water bills are also low. Nearly every village has a mohalla clinic. It is no secret that Delhi’s education sector has transformed. If you vote for AAP, you will see that same transformation in your state”.

AAP leaders like Rajdeep Naik and Adv. Amit Palekar were also present in the Parivartan Yatra. Naik said, “We have seen the treatment common people are receiving at the GMC, when they are admitted there. People have to wait for months to get medical treatment. When people choose private hospitals over government, they are burned out with high costs. In Delhi, Kejriwal government has set up a mohalla clinic, in each village and the government also bear the medical bills”.

Sudesh Mayekar, AAP leader said, “Calangute is known as a tourist place. During Covid most people from Calangute belt lost their job and the economic conditions got worse. But, the government is busy doing corruption. Calangute residents want basic facilities like free electricity, water and good roads. AAP will work for that. We don’t want to do any politics. This time give a chance to AAP, you will forget Congress and BJP. We want to earn our seats by doing work and not by just talking”.

“The residents of Calangute have suffered the worst under BJP’s misgovernance. Many tourism impacted families are interested in Kejriwal’s job Guarantee and support of INR 5000 to them till tourism gets back on its two feet. Only AAP will provide honest governance”.

“CM Pramod Sawant talking about 10 thousand jobs ahead of assembly elections but BJP is ruling Goa from the past 10 years. How many jobs BJP able to  provide?”, questioned Rahul Mhambre, AAP Goa Convenor.

He further said, “In Delhi, during Covid times the Kejriwal government has provided 10 lakh jobs and that too without any recommendation. AAP will provide employment to each house. People will get monthly allowance till they get employed”.

The party started its campaign in Dabolim and Calangute and will cover three constituencies daily. AAP is planning to conduct around 300 meetings in the state, ahead of the upcoming polls.

As part of this Parivartan Yatra, party leaders will organise sabhas in every constituency; where leaders will create awareness on the schemes and guarantees announced by AAP.