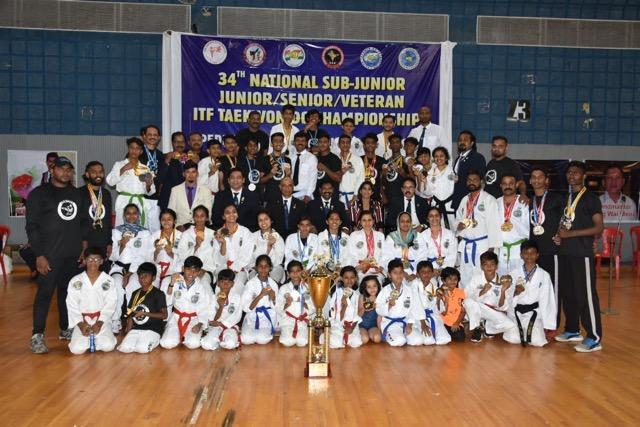 Mapusa: Organised by Prakash Jaigadi, Star Taekwon-Do Academy Goa in association with Taekwondo-Do Association of India and Goa Taekwon-Do Federation held a seminar on 26th and 27th december in Peddem Indoor stadium , Mapusa Goa.
On 28th to 30th December 2019 Taekwon-Do Championship was held at the same venue. While speaking to Mr. Prakash the organiser, told us that  as a kid he never imagined to pursue a career in sports he was weak in academics but when he saw his nephew who was very fit and always talked about Taekwon-Do it is from this point onwards that Prakash started taking an interest in this sport and now it has become an eminent part of his life. Prakash is a certified coach by ITF and TAI, he has taught students as young as 5 years and as old as 75 years . His students have excelled in in National as well as International events. Speaking about his dreams he said “ I want to create olympic gold medalists for India”
The Taekwon-Do Championship was inaugurated by ex Union minister Ramakant Khalap  on 28th December 2019 . South Goa Member of Parliament Francis Sardinha felicitated the winners of Taekwon-Do Championship.
In the Championship Gold Medal was bagged by  Alana da gama, Laxmi Pariyar
Where as Janak bisukarma got gold as well as bronze medal. Silver medal was bagged by Reece martins, Jeremiah dourado, Amit nagill,  Rajendra pariyan won silver and bronze medal , Srijana thapa silver medal
And the following students won Bronze medal Ruhaan naik  , Gaurang Shirodkar,
Sameer mirajkar ,D. Naveen  kumar , Babu Vishwakarma bronze.
- Advertisement -

Previous articleThousands support CAA at BJP’s rally in Panaji
Next articleWe have done something wrong to for foreign tourists to stop from coming: Michael Lobo