We for Fatorda innovates with traditional programmes for pandemic-hit carnival 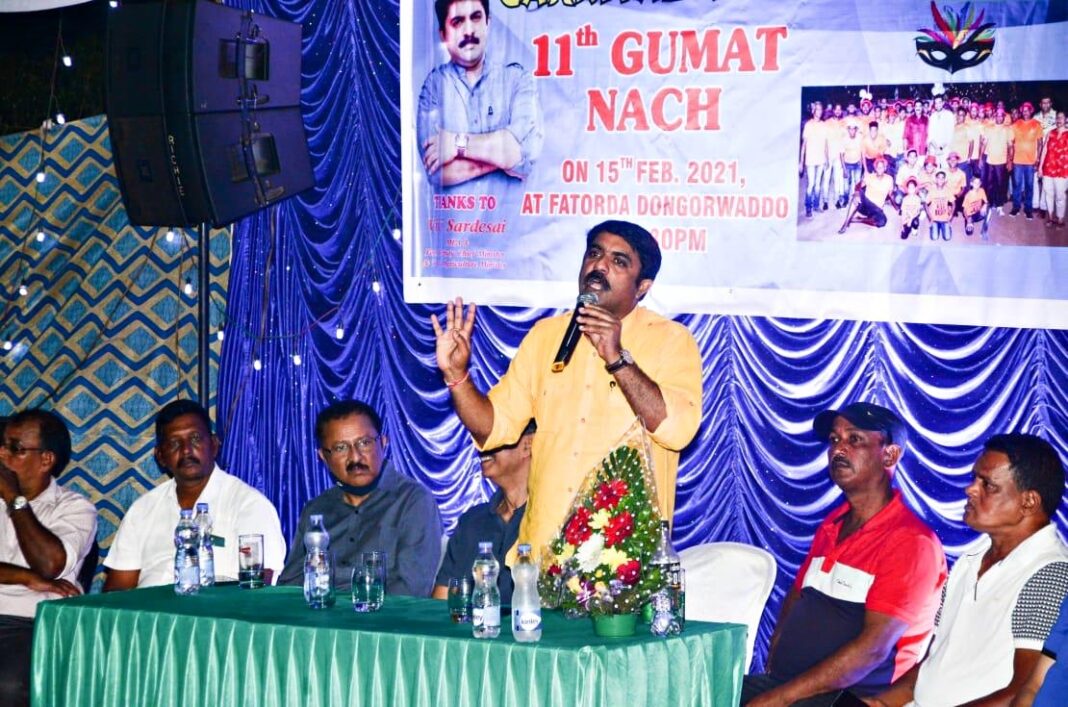 The 4-day long programme of Carnival celebrations in Fatorda, organised by ‘We for Fatorda – a Vijai Sardesai initiative’ ended today with an ‘Adeus Carnival’ musical evening at Maddel. Over the last 3 years, the highlight of the Carnival celebrations in Margao was the ‘Big Fat Fatorda Carnival Blast’ organised by ‘We for Fatorda’ at the Opinion Poll Square in front of Ravindra Bhavan Margao. All 3 years huge crowds were seen at the massively popular programmes on each of the 4 days of Carnival.

But this year, in view of the COVID pandemic, to ensure social distancing by avoiding huge crowds, the organisers decided to change the nature of the celebrations. ‘We for Fatorda’ decided to go to the people of Fatorda instead of inviting them all to one place and also decided to go traditional and evoke memories and nostalgia. The main aim was to celebrate safely by having programmes in each nook and corner of Fatorda, where smaller groups of people could enjoy Carnival. Khell Tiatrs were organised over all 4 days at 26 locations in each municipal ward of Fatorda. Fatordekars could therefore enjoy the traditional entertainment in their localities, near their homes. It also was a big boost to Khell Tiatr, which art form badly needed the support.

The Khell Tiatr artistes were also grateful to the Fatorda MLA, Shri Vijai Sardesai, who was instrumental in converting this situation into an opportunity to encourage the proponents of the Khell Tiatr art form which is in danger of dying out. Also, the time-honoured tradition of ‘Ghumta Vazop’ was performed at Dongorwado, Aguad, Murida, Marlem and Borda – all different areas of Fatorda – by local artistes, who were greatly enthused at being part of the Carnival celebrations promoted by ‘We for Fatorda’. A traditional musical show was also performed in the area opposite the PWD complex as part of the four-day celebrations, which ended with the ‘Adeus Carnival’ show.

Citizens of Fatorda were seen enjoying this traditional flavour of Carnival brought to them as an initiative of Vijai Sardesai. They were clearly pleased at this opportunity of experiencing cultural and musical traditions each evening at their doorstep, thanks to ‘We for Fatorda’.

It was a truly satisfying four days of Carnival celebrations, except for an isolated incident, which could have soured the whole occasion, but for very calm and composed conduct by the organisers in the face of provocative behaviour. On Monday, 15th February, the police attempted to sabotage the Carnival celebrations by clamping down on the Khell Tiatr being conducted in Ward 10, under the pretence of acting on a complaint by a local resident. ‘This must be the doing of the local BJP workers and supporters of the ex-MLA’, said one spectator, who did not wish to be named, adding that ‘they are jealous of the response these programmes are getting. They also want to use each and every opportunity to damage the harmony and co-operation with which we Fatordekars of all communities live together.’

Fatorda MLA Vijai Sardesai, speaking at one of the Khell Tiatrs, said that he was very happy at being able to bring back to the people of Fatorda these traditional forms of entertainment. He thanked them for the co-operation in ensuring a safe and healthy Carnival celebration by observing all the applicable SOPs. He apologised for the incident of the police shutting down a Khell Tiatr, saying. ‘what else can you expect from a Government that does not have any interest of Goa or Goans at heart, and which is not sensitive to the feelings of Goans.’