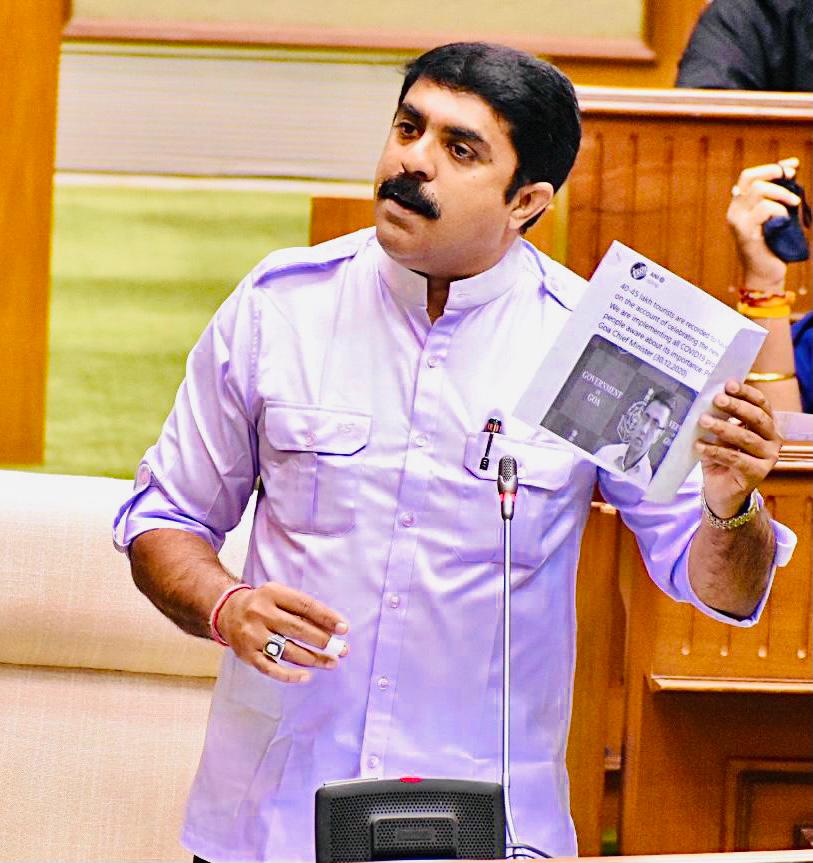 Vijai Sardesai during the fourth day of the assembly session spoke on the private member resolution raised jointly by himself and Alex Reginald regarding the three linear projects of the double tracking of railway line from Tinaighat to Madgaon, the four lane expansion of NH-4A, and the laying of 400 kV Transmission Line and additional systems for the Goa-Tamnar Transmission project.

The Fatorda MLA in his address said, “there is no evident ‘public purpose’ for these projects, and they are against the interests of the people of Goa.” Sardesai pointed out that “till date there has been no transparency from the government regarding the actual need or purpose for each of the 3 projects.”

Sardesai questioned whether the transmission line and the new substation at Sangod are needed at the cost of destruction of valuable trees and flora & fauna in the area.

Hitting out at the Chief Minister, Dr. Pramod Sawant, Vijai Sardesai said that “The CM claims that if the transmission line is not constructed within 2 years, Goa will have a power shortage , but what he should be promoting for a ‘swayampurna Goa’ is to push for solar power generation which can meet the targets set out by the Central government which would place us in a self-reliable position where we will not need any more allocation from the Central Grid other than what we get today.”

Furthermore, Sardesai pressed the government asking what the haste for the project was and pointed out that during the pandemic “the BJP government completely exploited the lockdown phase and didn’t even allow Gram Sabhas to be held threatening them under section 144.” Sardesai concluded saying “over 100 panchayats have passed resolutions in Gram Sabhas rejecting coal, and more than 3000 citizens have filed objections to the proposed land acquisition for double-tracking. The students, youngsters and children are protesting over social media, but this government does not want to listen to the people, and instead of making the state ‘swayampurna Goa’ under Pramod Sawant it is becoming ‘Salazar’s Goa again.”