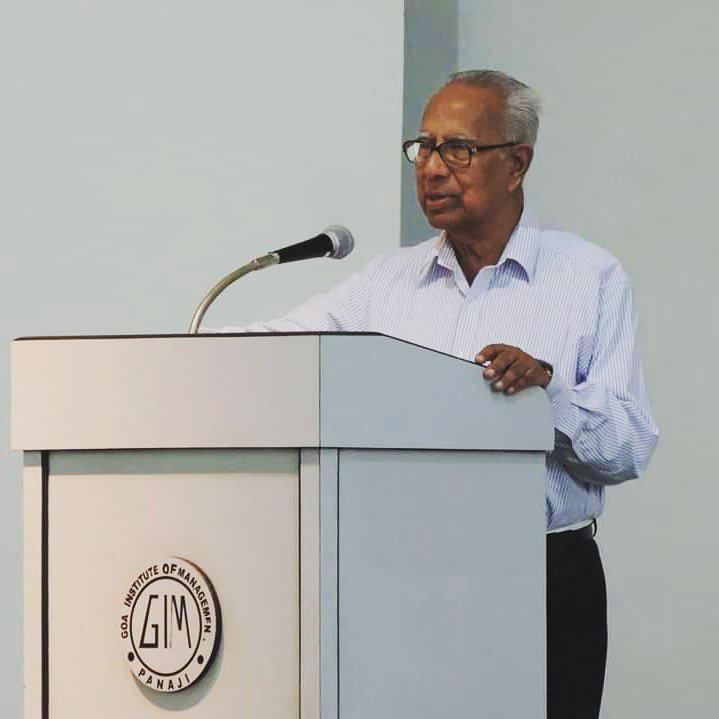 Father Romuald D’Souza moved on to meet with his maker at 6 am on the 1st of November at the young age of 94 years.

Born on 20th December 1925 in Aldona, Fr. Romuald completed his Masters in Counselling at Fordham University in New York and Columbia University. He was ordained as a priest in Belgium in 1958. He started his journey as an educationist after returning to India as principal of St Vincents High School Pune in 1967.

In his long journey in education, he founded several institutions starting with the Xavier Centre of Historical Research Porvorim in 1978. He then went on to serve as Director of XLRI Jamshedpur from 1982-89 during which he turned around a financially struggling XLRI. He founded Xavier Institute of Management Bhubaneshwar in 1987 firmly establishing it as a leading centre for management education in the country in just 5 years. Goa’s beloved son then returned to Goa to set up the Goa Institute of Management (GIM) in 1993 and continued to lead the institute as its founding director till 2004 and continued to be on the governing society of the institute ever since. He went to be a founding father of few institutes after GIM like the Marian Institute of Health Management.

I’ve known Fr. Romuald since 1983 and have worked with him right from the XIM days in Bhubaneshwar when he set up the institute and eventually moved to Goa to set up GIM. Founding two business schools which have gone on to become leading B-schools in the country wasn’t easy. But he got it done. I’ve known him closely, both professionally and personally. He’s been a mentor to me in many ways. Fr. Romuald was an extremely strong willed man. He never took no for an answer no matter how big the challenge ahead of him. He will be dearly missed.

Fr. Romuald D’souza was a visionary and pioneer in many ways. He set up a management institute at a time there were very few private B-schools in the country. His perseverance is a huge contributing factor to GIM completing 25 successful years of educating future leaders and being among the top private B-schools in the country. Ethics and value –based learning has always been at the core of what GIM stands for ever since the day it was founded 25 years ago by Fr. Romuald.

“It is sad, that the world has lost a leader who led by the way he lived. He will however always remain as shining guiding light to all of us.May his soul rest in peace.”

“A man of exemplary vision, Fr Romuald D’souza was perseverance and grit personified. Action-oriented and driven by the hunger to serve, he was loved by all for his humility, guiding leadership and resolve. Rest in peace Fr D’Souza, you still continue to inspire.” –

“There were times when we wondered how he did it – achieved so much in life and then, founded a Management Institute. The passion he expressed for learning and education was like no other. He inspired numerous students; left behind a legacy; a place many of us still and will call home.” –

“He was 93 when he graced the 25 year celebrations of Goa Institute of Management. He turned down any help to walk up the stairs. That’s just the person he was – ardent, strong and inspirational. His love for education, now resides in many a hearts and his legacy, left behind, in our Institute” –

“Fr. Romuald D’Souza was a strong willed, successful yet humble person that everyone admired. From establishing the Xavier’s Centre for historical research to setting up institutions like GIM and XIMB, he will be remembered as a tireless and ageless institution builder who touched the lives of numerous students. May his gentle soul rest in peace.” –

Previous articleIAS Puneet Goel is the chairman  of Staff Selection Commission
Next articleSATYA PAL MALIK WOULD BE SWORN IN AS GOA GOVERNOR ON NOV. 3