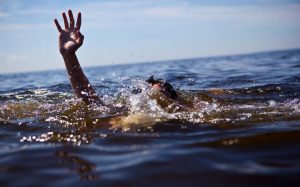 Panaji: A man from Patna was rescued earlier today at the Vagator beach. Another man from Jharkhand was saved along the Vagator coast. The Calangute beach too was witness to a double rescue and two, separate single rescues of Indian tourists from Karnataka, in three different incidents.

Around the scorching heat of 14:30hrs, a man from Patna entered into the sea at the Vagator beach. Drishti lifesaver Balkrishna Kalangutkar warned the tourist several times of the presence of a rip current in the deep sea which the man ignored. The victim, being a non-swimmer continued staying in the water despite the lifesaver’s advice. On experiencing an inward pull of a rip current, he called out for help. Drishti lifesaver Balkrishna rushed to the rescue of the victim and secured him on a rescue board, bringing him back to safety.

Along the Vagator coast, a 25 years old man from Jharkhand entered the sea in a rocky area at about 17:10hrs. The victim found himself in a dangerous situation and struggled for help. Drishti lifesaver Suhas Gawas immediately rushed to secure the victim and brought him safely to the shore.

A group of tourists from Karnataka went for a swim together at the Calangute beach at around 14:40hrs. Among the group of nine individuals, two of the men, one aged 18 and the other of  24 years, ventured into the deep sea and began drowning. On noticing this, Drishti lifesaver Ashwin Ghag relayed a rescue call which alerted Drishti lifesaver Karan Tandel who rushed to help in the rescue. While lifesaver Ashwin secured one victim onto the rescue board, the second victim was saved by lifesaver Karan with a rescue tube. Both the victims were brought back to the shore and checked for medical symptoms.

In another incident that took place at the Calangute coast, a 25-years old man from Karnataka went swimming at about 15:12hrs. The tourist waded into the deep waters and got pulled inside by a rip current. Drishti lifesaver and patrolling jetski operator Leslie Rodrigues who was on alert, rushed to the victim’s aid and secured him on the jetski, bringing him back ashore. .

At about 16:20 hrs,  a man from Karnataka, aged 24 years, entered into the sea at the Calangute beach. On getting caught in a rip current, the victim began to drown. Drishti lifesaver,  Leslie Rodrigues patrolling around the area on the jetski noticed the victim struggling for help and secured him on the jetski.