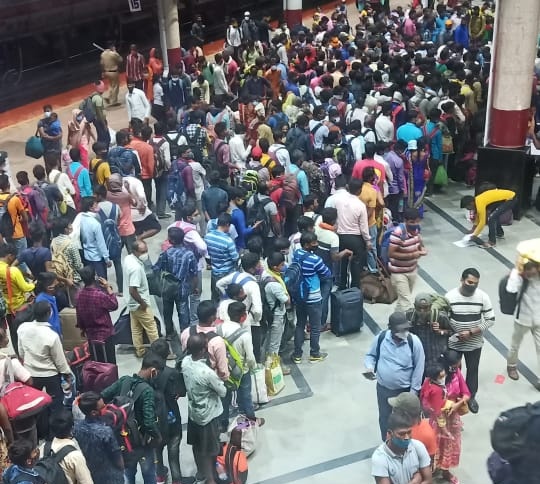 Panaji: Revolutionary Goans opine, the Goa government should not let its guard down and make all efforts to curb the spread of the virus by emphasizing on vaccination, restriction on entry of migrants and enforcement of strict SOP’s.
The state borders should be closed except for transporting essential items and entry of tourists should be limited by making a negative RT-PCR test report mandatory.
On Monday, early morning over 200-odd migrants and tourists were seen at Margao Railway station waiting to do an RT-Pcr test. It seems that despite Goa being under curfew the Sops were being violated as there was no social distancing being followed and there were few without even a mask. Will this mismanagement and carless attitude of our Government take us back in time with numbers of cases going up again.
Revolutionary Goans Chief, Manoj Parab pointed out that the last time when a video of thousands of migrants getting off a train at Thivim Railway station got viral, CM Pramod Sawant had assured he will look into the matter.
“That report is still not made public and I am sure CM as usual gave fake assurances to fool the Goans. Now again when Goa is under curfew so many migrants are entering Goa via train and is dangerous. If proper SOP’s are not followed then this will lead to the rise in corona cases in Goa. These migrants or tourist are coming here and then doing the test. In the meantime they will end up infecting the Goan population. Why are they not doing the test before boarding the trains,“ questioned Manoj.
“We Goans are asked to shut our shops and markets but uncontrolled migrant influx is unchecked risking the lives of Goans. We appeal to our CM to look into the matter to avoid another outbreak of corona in Goa,” he added.
Revolutionary Goans urge the State Health Secretary to direct all the concerned authorities to strictly follow the SOPs for migrants and outsiders retuning from other places via railway.
“No doubt according to the government, the test positivity rate in Goa has come down to 19 per cent, as against 51 per cent a month back. One should not forget that experts have predicted that the third wave may affect those below the age of 18 and also impact the state’s rural pockets. We should protect ourselves and the state from the third wave,” signed off Manoj.

PIC CAPTION: On Monday, early morning over 200-odd migrants and tourists were seen at Margao Railway station waiting to do an RT-Pcr test.