Porvorim: Local MLA Rohan Khaunte promoted event “The Grand Porvorizza 2019”  was held on Saturday with the audience regaling to the various programmes.

The Grand Porvorizza 2019 was organised on Saturday at Porvorim ground opposite Delfinos , this event was organized in assosianion with Goa Art and Culture and Creative Group.

Porvorim MLA Rohan Khaunte has promoted this event which was attended by thousands of people from Porvorim and also across the State.

The visitors were treated with various food and accessories stalls by the locals. The organizers said that the funds generated from the event would be donated to the cause of differently abled people. 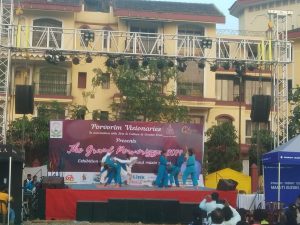 The local artists also got the platform to showcase their talent.

During the event, there was performance of Tabla by Siddhartha Saldana, Bharatnatyam by Maithili,

Live music band shows By band ‘Mando’, dance by Omega Dance and Fitness Classes and others.

Magician Tanishka performed for the event.

There was also a dance performance by Rasika while youngest DJ Johan also performed to the crowd.