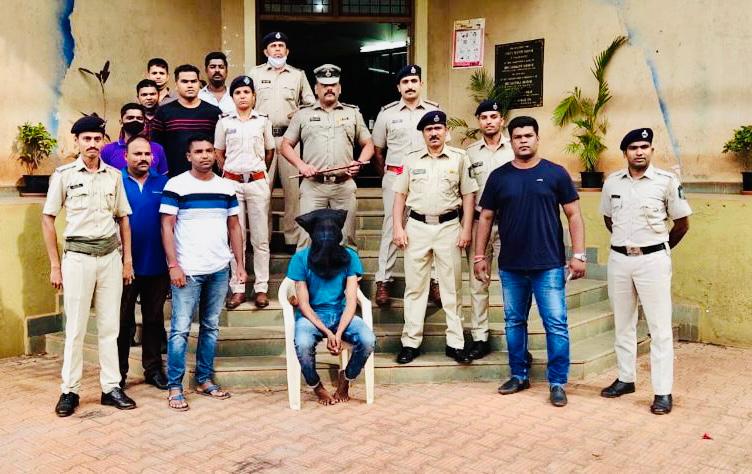 As per SP North Shri Shobit Saxena, on 02.07.2021 the dead body of Mr. Chandrakant Bandekar from Sakral- Pernem along with his Activa scooter was found in forest area of Mopa village with multiple stab injuries over body. Murder case was registered against a unknown person at Pernem Police station by and investigation was taken up. Various teams were formed under the supervision of S.P. Shri. Shobit Saxena, IPS who were working towards detection of the case. Extensive checking of CCTV footages throughout the surrounding areas and border check posts was carried out and they were very minutely analysed by all the staff.

One CCTV footage gave a lead that deceased Chandrakant Bandekar had given lift to one pedestrian who was proceeding towards Patradevi. Number of persons were interrogated thoroughly.

During investigation it was learnt that mobile phone, wallet containing cash and one gold chain of the deceased was missing. As such the mobile phone of deceased person was put under continous technical surveillance.
In the month of August 2021, the stolen mobile phone of the deceased got activated in Amravati region of Maharashtra state. Accordingly a team was formed consisting of Pernem Police Station staff and Crime Branch staff left to Amravati Maharashtra.

The user of the mobile phone was traced at Badnera, Amravati with the help of local police. during enquiry he informed that he had purchased the phone from another person of of Ahmedabad Gujarat. As such the team immediately left to Ahmedabad Gujarat and located the said person with the help of local police. Upon questioning he disclosed to police that the said mobile phone was given to him by his friend Mr. Jaypuri Gosai who also stays with him in his rented room. As such police team immediately took Mr. Jaypuri Gosai into custody and during interrogation he admitted of having committed the crime. The weapon of assault, mobile phone and the gold chain in melted form is recovered by the Police. Accused is brought at the Pernem Police and is under police custody.

All the staff of Goa Police put on
extensive and meticulous efforts for investigation during the crime.

Further investigation is in progress with PI Jivba Dalvi of Pernem PS under the supervision of SDPO Gajanan Prabhudesai and SP North Shobit Saxena, IPS.