Peoples Opinion matters most in a democracy! By Rohan Khaunte 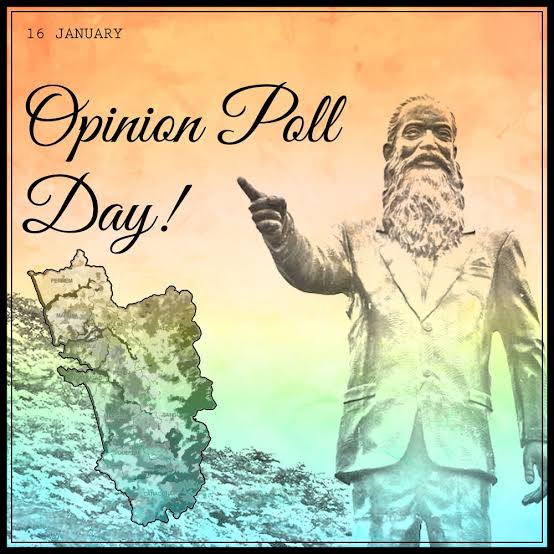 The Goa Opinion Poll Day signifies to all upcoming generations of how our ancestors preserved the Goan identity against the merger into Maharashtra. If not for the strong will of our Fore-Father’s we wouldn’t be standing Proud as Goans today. So now it’s our duty to preserve Goemkarponn by taking Pride in our Natural Beauty & Bounty which signifies Goa and protecting it for our future generations.

Goa is famous for being a peaceful heaven and it’s our sacred duty to preserve it from Corruption and Political Divides created by vested interests who are trying to upset our peaceful lives. There are deviously concentrated efforts to destroy our environment to merely favour the evil designs of Corporates. Our Government is not interested in listening to People’s Protests or Democratic solutions be it Mollem or Melauli. While our Fore-Father’s stood with a strong spine, the present spineless government is bending down to Central dictats and surrendering even our Mother Mhadei.

With Absolute Corruption and Mis-Governance, this Government has put to shame our ancestors struggles & failed Goans even in a pandemic with its Utter Covid Mismanagement. Instead of People’s Welfare the entire Government machinery is concentrated towards the election strategies of BJPGOA leaving people to run from pillar to post.

Criminalisation of Politics has become the hallmark of this Government which is in a race to induct Drug Lord’s and Mafia elements so as to impose its autocratic rule on the people of Goa.

We’re going through difficult times as the pandemic has destroyed our economy while our own Government is acting against our benefits on every sensitive matter. People’s Voices are being suppressed with brutal police force. Party politics are overriding people’s welfare. Right now, we need strong leaders who’re willing to uphold Goemkarponn instead of kneeling down to the diktats of Corporates & Centre.

The villagers of Melauli have proven by their gritty struggle that People’s Power always triumphs. Similarly, we should Stand United for the Goan Identity and our Environment

While this is a win for the Melauli villagers it’s to be noted that such withdrawal by cmpramodpsawant is following the Central BJP orders to keep away from controversial projects in wake of upcoming election. Therefore, there’s every possibility that this project will be revived if they win the election. I am of the stand that we need the prestigious IIT in Goa but the Government should find a barren & uncontroversial site. Now is the time for Dr Pramod Sawant to show his real commitment towards having an IIT in Goa by identifying such a site instead of simply scrapping the project as an election pleaser.

Let’s remember the sacrifices and strong will of our Fore-Father’s by Voicing our Opinion & standing together to take Goa to the pinnacles of Social, Cultural & Economic prosperity as envisaged by our fore-father’s on this day while preserving the Goan identity.