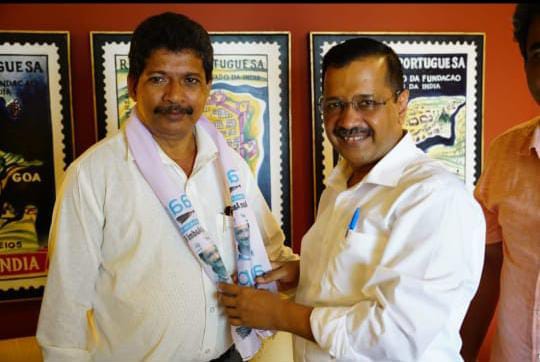 OBC Rashtriya Mahasang President and former Betaki – Khandola panch member Nonu Naik joined AAP.  Nonu Naik is a Founding Secretary of Marcel Patrakar sangh and he has done remarkable work as a journalist. He has worked as a teacher in various parts of Goa from 1982-1992 under the Trisium Scheme run by the Rural Development Agency. He was a part of Baba Amte’s Bharat Jodo Abhiyan as the head of Navnirman Abhiyan Ponda taluka. He was ex chairman of Betki Khandola Consumer Cooperative Service Society and ex secretary of All Goa Anganwadi Staff Union.

“I believe AAP is an alternative what Goans were looking out since decade. I’m impressed by the work Kejriwal government has done in Delhi and I want to see such honest governance in the state. Hence, I joined the AAP” said Naik.

“AAP has been growing at a fast pace in Goa. Goenkars are beginning to feel that their only hope for the future is AAP. The party has been taking up many issues that the BJP and Congress both have ignored for years. I am happy that leaders like Nonu Naik have joined the party to take forward Arvind Kejriwal’s vision” said Rahul Mhambre AAP Goa Convenor