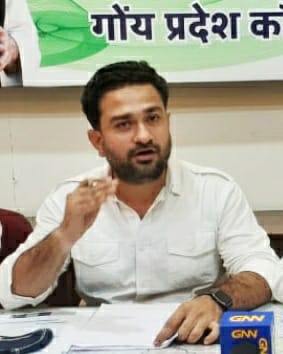 Panaji : The President of Goa Pradesh Youth Congress Adv. Varad Mardolkar has demanded that COVID treatment in private hospitals be made absolutely free and also to extend the days of treatment, which the government has brought down to ten days under DDSSY insurance.
Citing an example of “Chiranjeevi Yojana” by Rajasthan government which gives an annual cashless insurance cover of ₹5 lakh to every family in the State, Mardolkar said that Goa government needs to increase slab of insurance under DDSSY.
Mardolkar said that he welcomes the government decision to bring COVID disease under DDSSY, but the government should further increase the slab of insurance and also days of treatment. “Some patients may require more than ten days to recover from the disease. Hence, the government should think over this and increase the days of treatment so the patients will not have to pay from their pockets if they get admitted more than ten days.” He said.
“I hope the government brought down the days of home quarantine from 17 to 10 by consulting doctors. If so, then they should be aware that some patients take more than ten days to recover. Hence, on an urgent basis the government should amend their decision.” He said.
He said that the government was forced to revise DDSSY as it failed to provide beds, oxygen and ventilators in government hospitals. “Now government is fully dependent on private hospitals and hence to cover their mistake of failing to contain the spread of the virus, it has given solace to the DDSSY scheme. But it should be given properly.” He said.
Mardolakr also demanded that the government should immediately come up with COVID Isolation Centers, so the families having one room houses finds solace here. “there are many families who live in one or two room houses with common toilets. If anyone among them is tested positive, then by living in the same home they may transmit the virus to other members of the family. Hence these COVID quarantine centers are required.” He Concluded.
- Advertisement -