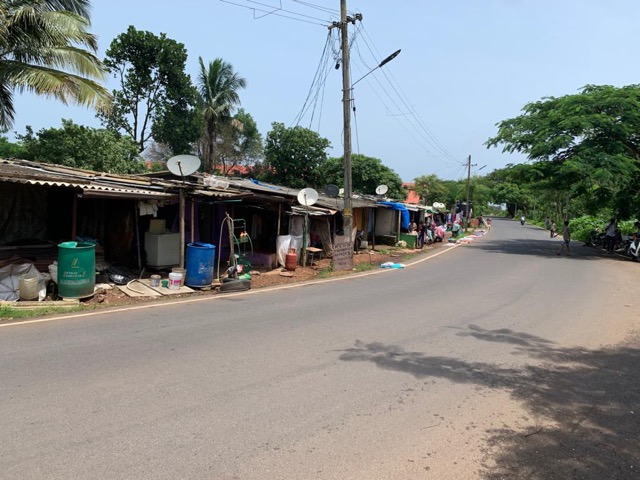 Panaji: Revolutionary Goans allege that over the last decade the number of slums in St Andre Constituency has grown by over 30 per cent. These illegal slums have mushroomed with the patronage of local goons, who are part of an influential mafia. The mafia have strong political connections which shields the migrants from eviction drives carried out by the Government. This shows the political nexus operating which makes it difficult for the enforcement of law.
The Revolutionary Goans President, Viresh Borkar pointed out that a perfect example of this is the illegal migrant slums in the making near Military Camp at Curca. There are several slums in the state which are inhabited by migrants.
“These illegal encroachments are increasing with the blessings of the local MLA who is shielding them as they form a major portion of his vote bank. Unless the authorities concerned act fast and clear the area of these structures, the slum will only grow in size in the future and cause more nuisance to the locals besides presenting an ugly sight. There was a demolition order issued but till date no action has been taken,” said Viresh.
In St Andre constituency itself there are over 1,700- odd migrant voters.  Out of the 21,000 odd voters a whopping 10% comprise of migrant voters. There is a need to verify the photo electrol rolls as it is known that there are several bogus voters registered fraudulently on these rolls. We will make sure these names are deleted before the next assembly election
There are serious lapses on the part of the officials as one else can manipulate the electoral rolls. It came to light that there are thousands of bogus identity cards that have been issued with voters’ names and addresses of people from outside Goa.  The names mentioned on the card do not even reside at the addresses mentioned on the card. They are brought to Goa only for the purpose of voting.
“Thousands of these migrants come to Goa by train every day and their whereabouts are not known. So many of them encroach upon open places in the village, get involved in illegal activities as well as carry out roadside businesses. They also commit thefts, rapes, murders and supply drugs in our villages,” Viresh highlighted.
The St Andre MLA, Francisco Silveira has always been speaking in favour of the migrants in his constituency because they form a major chunk of this vote bank.
One can recall that two years ago he even requested Chief Minister, Pramod Sawant not to stop migrants arriving in Goa ahead of the fishing season. “Over 10,000 migrant labourers come to work on trawlers. Fishing activity will come to a standstill if they are not allowed to enter the state. Migrant labourers are employed because Goans are not willing to work on trawlers. Police can conduct verifications, but they should not be restrained or else they will come to Goa to work later and trawlers will not be able to operate,” Silveira had stated.
Revolutionary Goans opine that it is high time the villages across Goa formally resolve to ban migrants from traditional and tourism-centric businesses. First of all we Goans are facing lack of business opportunities and law and order issues. They have taken over our vegetable market as well as our fish business. “It is time the villages in St Andre ban granting of licenses to migrants for running businesses ranging from fishing to running restaurants. Our local and traditional occupations need to be protected and others should not be allowed to run these activities, directly or indirectly. We need to act before we become strangers in our own land,” signed of Viresh.

Previous articleHC to hear CCP nominated councillors case
Next article59 new infections,  one died  due to covid-19 in Goa on Sunday