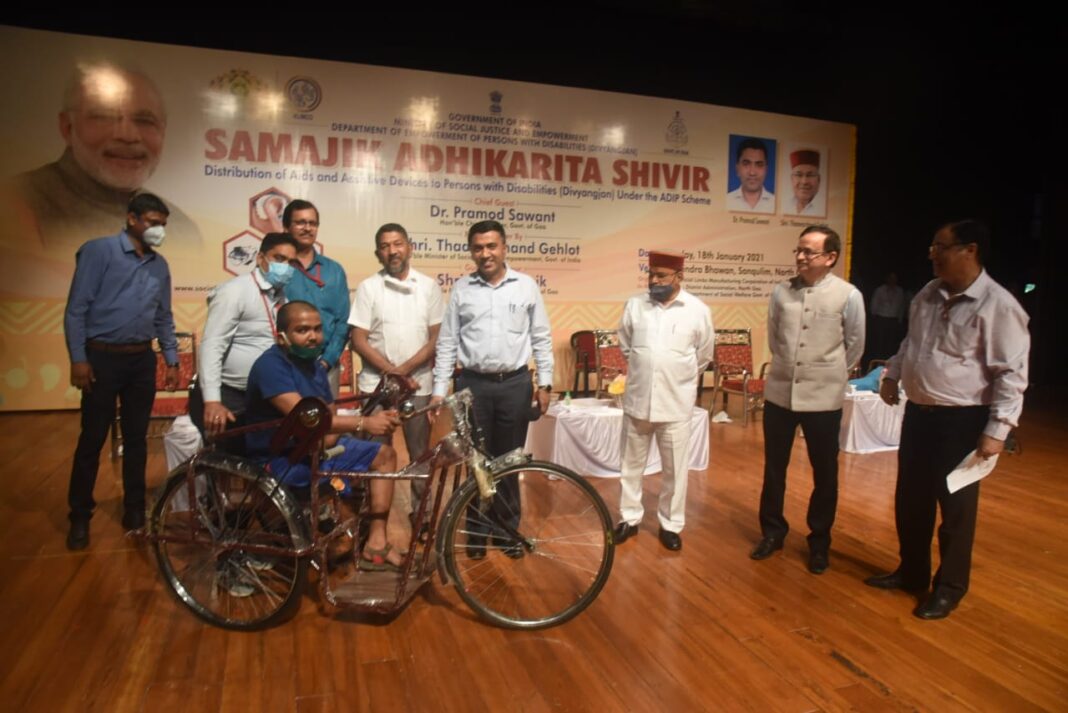 Panaji: Chief Minister, Dr. Pramod Sawant stating that the government is in process to carry out fresh survey of the persons with disabilities in the State appealed to the Elected Represetatives to identify the persons having disabilities in their areas.
Chief Minister was speaking at Samajik Adhikarita Shivir, distribution of Aids and Assistive Devices to person with disabilities (Divyangjan) under the ADIP scheme organized by Artificial Limbs Manufacturing Corporation of India, Kanpur in association with District Administration, North Goa and Department of Social Welfare at Ravindra Bhavan, Sankhali.
Chief Minister highlighted various schemes that are availble in the state for Senior Citizens.
Chief Minister said, the State Goverment is giving standard education through 22 special set up schools. He said B.Ed training facility is also made available in the State for such students.
Chief Minister said, minimum interest loan facility will be made available soon for persons with disabilities. Government is also thinking to start hostel for such persons in the state, he addef..
Minister for Social Justice and Empowerment, Goverment of India Shri Thaawarchand Gehlot precided over the function. Minister for Social Welfare Shri Milind Naik graced the occasion.
Addressing the gathering Shri Thaawarchand Gehlot informed that Ministry of Social Justice and Empowerment Department of Empowerment of Persons with Disabilities work  is praised all over the globe. For such constructive  the Department has received ten world Guinness world records.
He said under the guidance of Prime Minister they have brought new laws benefiting differently abled persons. 4 percent reservation is given for the persons with disabilities.
3566 new post has been created. 14000 posts have been filled by the Union Government.  4 .44 crores had been made available for Goa Government, he added.
He said 6 types of scholorships are given for the persons with disabilities, adding that Goa has been given Rs. 44 lakhs under this scheme.
Shri Thaawarchand Gehlot praised the State government efforts for taking interest and for working to uplift the livings of persons with disabilities. He said 18 camps were organized in the state of Goa.
Speaking on the occassion Shri Milind Naik said, lot many things are left to be done for the persons with disabilities. He said left out person with disabilities will be covered in second round.
Dr. Prabodh Seth, Joint Secretary, Shri D. R. Sarin, Chairman of  Artificial Limbs Manufacturing Corporation of india, Shri Umeshchandra Joshi, Director, Department of Social Welfare were present on occassion.
Earler Shri Umeshchandra Joshi welcomed the guests, Shri Pradip Naik compered and Shri D. R. Sarin proposed vote of thanks.
Aids and Assistive Devices worth Rupees 1 crore 52 lakhs were distributed to the divyangjans in the State. Total 699 beneficiaries were identified. 257 numbers of beneficiaries were provided with asistive devices.