Goans are intelligent and will vote as per their conscience, prices of Fuel ,LPG can come down by 50 percent if got under GST – Digambar Kamat at Vasco 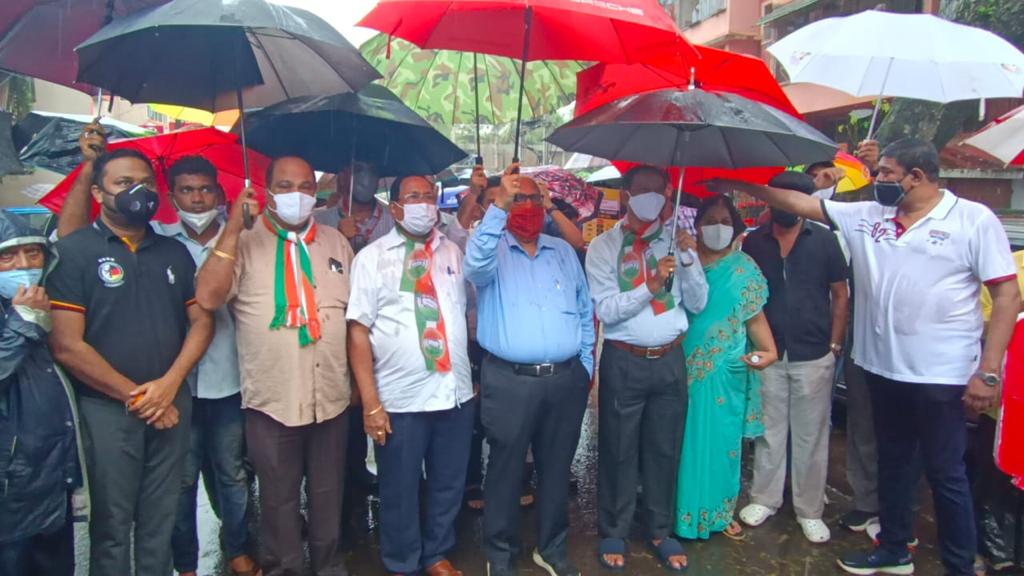 Vasco:- Leader of Opposition and Former CM Digambar Kamat on Sunday evening said People of Goa are smart and know who is contesting elections only to divide votes. Kamat was speaking to reporters during a massive rally to demand a roll back on skyrocketing prices of fuel and LPG cylinders .

Hundreds of people from Mormugao Taluka on Sunday evening braved incessant rains to participate in a protest rally organised by GPCC in association of Marmagoa Block Congress Committee as a part of AICC nationwide protest. Vice President Sankalp Amonkar was incharge of the protest against rising prices of fuel and LPG cylinders.

Kamat said that the poor and middle class people had been finished as they BJP Government did not offer any package. Kamat also added that if the Fuel and LPG cylinders were brought under GST, the prices would be reduced considerably.

GPCC President Girish Chodankar speaking to media said that the country was regretting the decision to elect Narendra Modi. Chodankar said that prices of Fuel was rising 65 times and prices of fuel had been increased by 800 percent and that the BJP Government instead of helping the people had begun looting pockets from local people already suffering in the pandemic. Chodankar said that Acche Din was a jhumla and people were looking forward to the previous days of congres. He said Government has collected over Rs. 36 Lakh Crores in the name of Fuel taxes. Actually prices of Petrol & Diesel is around Rs. 36 per liter.

GPCC Vice President Sankalp Amonkar said that slogan on the LPG cylinder ” Respecting a woman’s dignity had no meaning when the prices of LPG cylinders were reaching the sky.
Amonkar thanked all his supporters who gathered in hundreds to attend the protest rally against fuel prices.

Mahila Congress president Beena Naik criticised BJP Government for making women suffer due to inflation while YC president Varad Mardolkar raised issues of suffering of youths due to loss of jobs and business.

Women protesters used Goa’s traditional Dhol Tasha for protesting while youths carried Maruti Car on cart to register the protest. They also used PM Narendra Modi’s speech asking people whether prices of petrol Diesel has been reduced and whether people have started saving money. Various slogans demanding reduction of fuel prices were also raised. The State level protest which began from Rukmini building Baina culminated near Ravindra Bhawan due to rains which was to culminate in city.

Previous articleGoa Board to announce HSSC results on Monday
Next article120 new infections, two died due to covid-19 in Goa on Sunday