Goa will awake the conscience of Nation against ‘dadagiri govt’: Chodankar 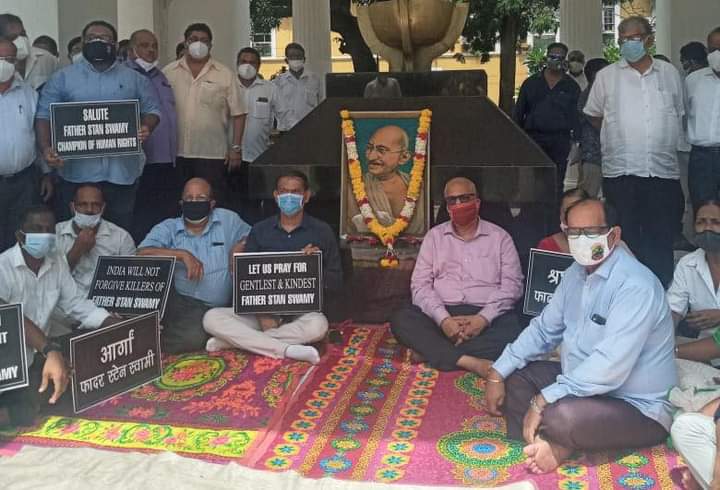 Panaji: While condemning the killing of Fr. Stan Swamy, the Goa Pradesh Congress Committee Girish Chodankar has said that Swamy’s sacrifice for the nation should convert into revolt against Narendra Modi-led ‘dadagiri’ government and there is need to awaken the national conscience.

He also demanded to release all those activists, who are purposely put in jail.

“Since this BJP government has come to power, it has sent around 3974 activists behind the bars to further suppress their voice. They should be released immediately.” he demanded.

He was speaking during the protest organized by Congress party at Azad Maidan Panaji against the brutality, inhumanity and custodial killing of Fr. Stan Swamy.

“There is a need to awaken the national conscience and we Goans  to start this revolt and will awaken the people of India.” Chodankar said.

“ He worked and fought to give rights to backward classes and tribals.” he said.

“BJP is all out to suppress the voice of the public and harass activists. This party is imposing its dadagiri on the people of the country.” He said.

He said that with the death of Father Stan Swamy, it is proved that undeclared emergency has been imposed in the nation.

“Peoples freedom of speech and rights are bulldozed by this BJP government. It is misusing the power by filing false cases against people, thus suppressing voice,” he said.

“Father Stan Swamy’s death is ‘institutional murder’. This government is fully responsible for the death of Swamy.” he said.

“How an octogenarian activist can become a harm or threat to a nation. He had no arms and amunation. Government should have shown some mercy at least by considering his age. Government failed to give him his rights and facilities after his arrest. Rather he met injustice and harassment.” he said.

“For journalist Arnab Swami, the court and government open their offices at midnight. Is he more important than an activist?” Chodankar questioned.

Digambar Kamat said that Stan Swamy lost his life fighting for justice at a hospital, where he was transferred on the orders of High court as the government was not arranging his treatment.

“Government should not arrest activists, our country achieved freedom through Mahata Gandhi’s Satyagraha, nonviolence and ahimsa through his activism. Freedom of speech is a fundamental right that should be given to all and the government should not be strangled.  This is not democracy. Now it is high time that the people of the country should introspect,” Kamat said.

Spokesperson Tulio D’Souza in his speech said his death should not go in vain, as he always said that innocent people should not be jailed. Rudolf Fernandes questioned the arrest of Father Stan Swamy.

“He was deprived of basic treatment, we condemn this act,” Youth Congress President Varad Mardolkar said.

Vellim Leader Savio D’silva said it’s painful to see Fr. Swamy who worked for downtrodden has to suffer in such a way at the hands of BJP government and strongly condemned the act of the government.