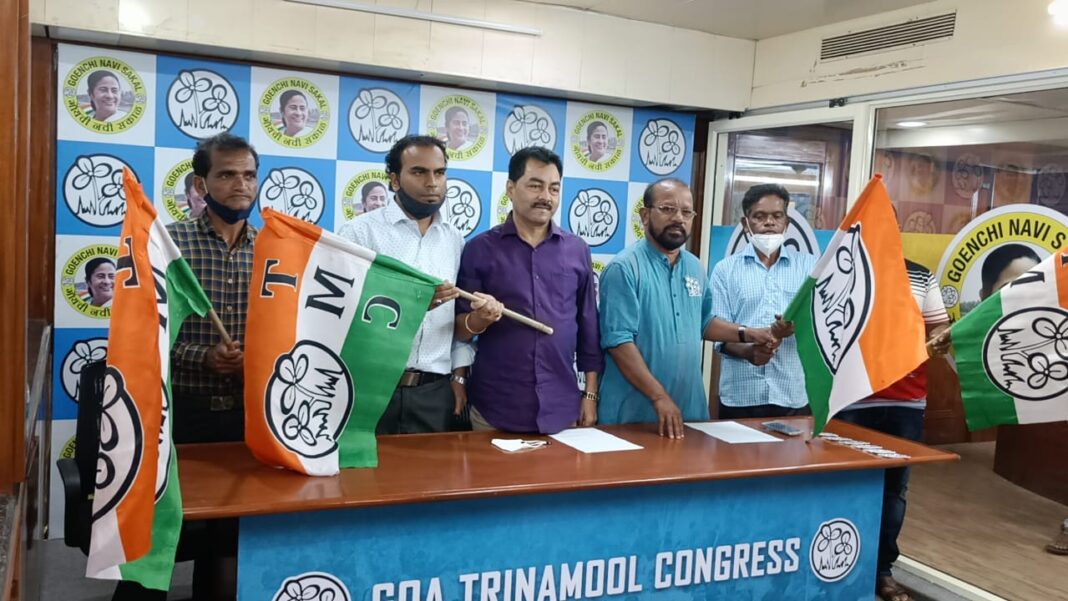 Goa Trinamool Congress strengthened its base in Poriem constituency with the induction of dynamic activists – President of Shiv Samman Sanghatana, Shri Sujeet Kerkar along with three members – Shri Purushottam Gaonkar, Shri Bhikaji Majik and Shri Pravin Majik in the presence of Goa TMC leaders Shri Kiran Kandolkar and Shri Kanta Gaude on Monday at the party office in Panaji.

Expressing their faith in the leadership of Goa TMC, the new entrants said that Goa TMC is the only credible alternative against the fascist BJP.

Following the induction, Shri Sujeet Kerkar stated, “I have joined the party because it is the only party which talks of ‘real’ development. Schemes like Griha Laxmi Card and Yuva Shakti Card are proof of the fact that TMC delivers what it promises. Congress has failed over the years to fight the BJP and it is time that Goans choose a credible government.”

Taking pride in the growing TMC family, Shri Kiran Kandolkar said, ‘If we want to stop the injustice and sufferings inflicted upon Goans by the BJP then we must bring TMC to power. TMC is the only alternative.’

Welcoming the new inductees, Shri Kanta Gaude said, “People of Poriem and Valpoi were ruled by only one family until today. It is a day of joy to see people from all walks of life joining Goa TMC. This is the ‘New Dawn’ that we’ve been talking about.’

Goa Trinamool Congress wholeheartedly welcomes these determined grassroots activists into the party fold. TMC is convinced that with their hard work and conviction, Goa will usher in a ‘New Dawn’ soon.