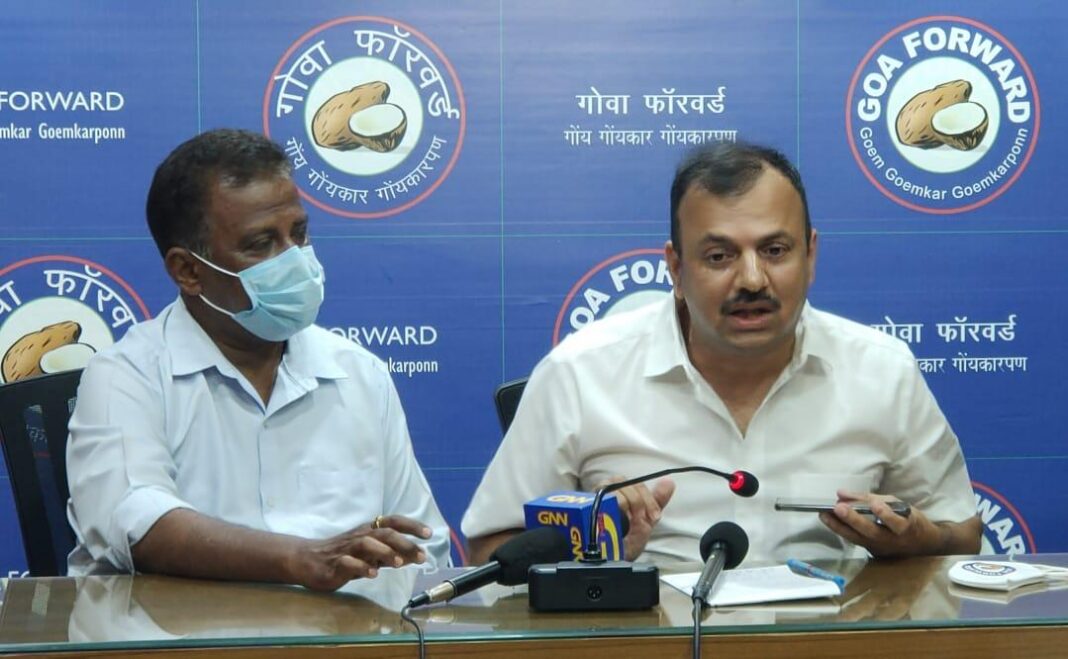 Talking to reporters, Bhobe said the GFP conducted a sting operation to show all Goans that the BJP is a highly corrupt party that does not care for the people even at the time of a pandemic. He said, “in the midst of the pandemic, the concern of the NGPDA is not what the people are going through, but how to make more money.”

Bhobe hit out against the St. Andre MLA saying, “we knew he hopped over to the BJP for self-development, and his blatant misuse of the NGPDA is enough grounds to call for his sacking as Chairman.”

An audio conversation released by Bhobe reveals Vishwas Gharse, an NGPDA member demanding bribes for land conversions at the rate of Rs.1 lakh per bungalow. Bhobe points out that Vishwas Gharse also blackmails the undisclosed caller claiming he would direct officials of NGPDA to issue notice for illegal construction .

“Why does Silveira along with his board member at the NGPDA blackmail people?

Bhobe asked, adding “He (Silveira) as chairperson of the NGPDA, and Gharse,,as member, are bound to follow the PDA rules; Does Chief Minister also get a share in this ?Questioned Bhobe

The Goa Forward leader added, “while Goa is suffering from the trauma of the pandemic, the NGPDA and the BJP MLA are busy making money under the table.”

Bhobe said “not only is it illegal to take the bribes, but what Gharse and Silveria have shown is that they do not care about Goemkars at all”. He added that “the Panaji BJP MLA was right who said that 50% of the ministers are useless.”

Jagdish Bhobe demanded the resignation of Francis Silveira as chairperson of the NGPDA and Vishwas Gharse as member of the NGPDA with immediate effect.

Bhobe said, “If not, the CM needs to immediately remove both Silveira and Gharse from their positions with the NGPDA.

Bhobe said “Francis Silveira joined the BJP for self-development, and now even in the midst of the pandemic, he cannot help his own constituency, but he is stealing money from them.” He highlighted that “the people of St. Andre have lost all trust in the MLA and what he is doing to them is a crime for which he will never be forgiven.”

Bhobe stated “the one right thing the CM can do now is to immediately sack Silveira and Gharse from their positions and prove to Goa that he cares about the people for once.”

Jagdish Bhobe pointed out that two days ago the CM had said that he would take strict action against any form of corruption in the state. He demanded that the Chief Minister take “urgent action” saying that if the CM fails to do so, it would be proven beyond doubt that he also is complicit in their corrupt activities.

Bhobe mentioned that if the CM fails to take action he would approach the High Court.