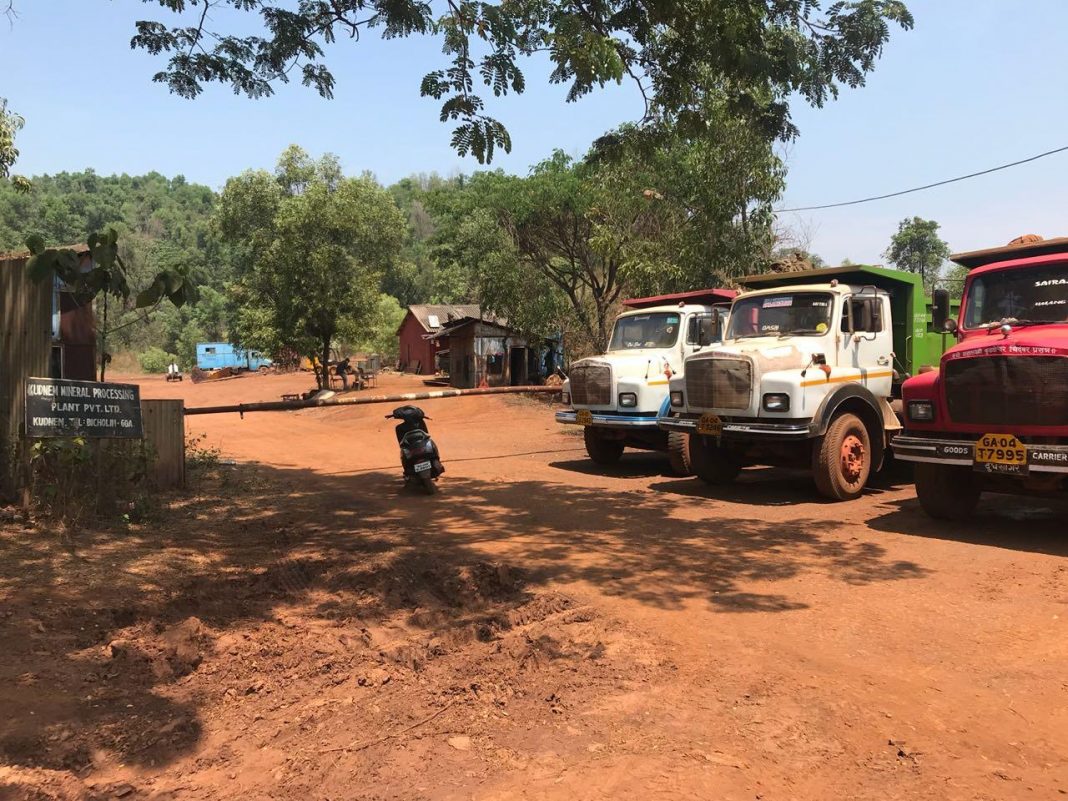 This is what Joshi has posted on the FB:

Allegation 1: Our Chief Minister has said that Shah Commission report was a lie and Loss of Rs. 35000 crores claimed has been brought down to Rs. 4000 Crores.

Explanation 1: Justice Shah in his own report said that figure is calculated based on reading of hand held instruments by laymen. That, to arrive at actuals, experts have to survey with accurate instruments. For this Director of Mines & Geology, Goa had called more than 5 independent agencies approved by ministry of Mines, Their survey done by experts and with latest equipment clearly brought out that there is not an iota of truth in this allegation. Fact is Justice Shah was in Karnataka before Goa. There he had seen rampant mining outside the lease area. An NGO led him to believe that similar illegal mining is taking place in Goa.
Government had appointed an enquiry by Chartered Accountants’ committee. Current number declared by Chief Minister is based on finding of this committee as well as Special investigation team. No one should have any objection to authenticity of finding of such committees.

Allegation 2: Goa Mining People’s Front(GMPF) is not agitating for any mine to restart immediately. In fact they are agitating for 5 erstwhile lease holders to get back their leases.

Explanation 2: Mining in Goa and its concessions/leases(C/L) are very special. I have worked in Goa’s Mines for more than 20 years. But before coming to Goa I was Mine Manager of a mine which had its own township for all employees within my lease. It also had its own explosive magazine with its own armed security directly reporting to SP of that District. My lease also had its own office, maintenance workshop, stores, diesel storage and dispensing pump, processing plant and railway siding for evacuation of the product. My lease had an orebody demarcated with outer limit of mining and areas demarcated for waste dump as well as product stockpiles near railway siding. I was responsible for a lease which had 22.5 Sq Km area.

Goa’s biggest C/L by contrast is just 1 Sq Km. In one ore body there are so many C/Ls. Forget about all other non core activities which have to be outside C/L, there is no place even for proper mining. So Goa’s leaseholders over a period of time acquired land and got permission from various Governments in the past for setting up offices, dumps, processing plants, tailing ponds, product stock piles and barge loading facilities outside the C/L area.

Goa’s C/Ls were given to concession holders along with surface rights in perpetuity and had no time limit. GMPF has been advised by legal experts that with special situation prevailing in Goa, if leases are auctioned, instead of restarting, there can only be a legal fights and GMPF would have to wait for long time for their earning to restart. So GMPF is forced to demand change in Concession Abolition act which has fastest possibility of restart of Mining Industry in Goa. They have right to be worried about their livelihood.

Allegation 3: In spite of closure of mining, Goa Government has not worked towards auction of leases which is against law and intent of Constitution. Instead Government is trying to give leases to same lease holders free of cost.

Explanation 3: As said at explanation 2, If the leases are self contained, they can be auctioned but if leases are such that their conversion from concession to lease is still a matter open in Court, and that for all non core activities the new lease holders will depend on facilities owned by erstwhile lease holders, then auction can only bring confusion and litigation. In any case, as of today in spite of best efforts by neighbouring Government of Karnataka, only few leases with large area got auctioned out of which only one lease has been able to start the operation. That is the reason Government of Goa is forced to think in terms of requesting Union Government to make Concession Abolition to act to take effect prospectively.

Goa’s leases have paid huge amounts towards stamp duty while executing the lease deeds. They have all paid huge amounts while regularising the areas used outside the leases either for dumps or for product stock piles. Till 15th of March, only Goa’s leases paid 10% of price to Goa Government in addition to district development fund mandated by law as per supreme Court directive as if mining is happening only in Goa. If People are expecting more money for leases, they surely do not want operational leases in Goa.

Allegation 4: In spite of 6 years in Power, Government has not dared to take action against any established mining Company. Government is not only corrupt but also inefficient.

Explanation 4: Mining In Goa has history of 7 decades of operation. Established companies in Goa have many good achievements applauded by all in the country. They can do mistakes but they are not expected to do anything that will call for criminal action or penalty. It is like saying Mr Raju Nayak has done a criminal conspiracy while printing Lokmat. Can anyone believe it?

When BJP Government came to power in 2012, they cancelled the registration of 420 entities registered with DMG under Rule 3 of The Goa (Prevention of Illegal Mining, Transportation & Storage of Minerals) Rules,2004. They asked all entities to re-register themselves with proper papers. Only about 80 entities reregistered. Remaining entities just vanished in thin air because they were registered with false names and false addresses. These entities did illegalities against which SIT continues to work.

In recent Judgement of Supreme Court, they found technical fault in renewal of leases so they have set it aside. They have never said a single remark about either corruption by the Government or its inefficiency.