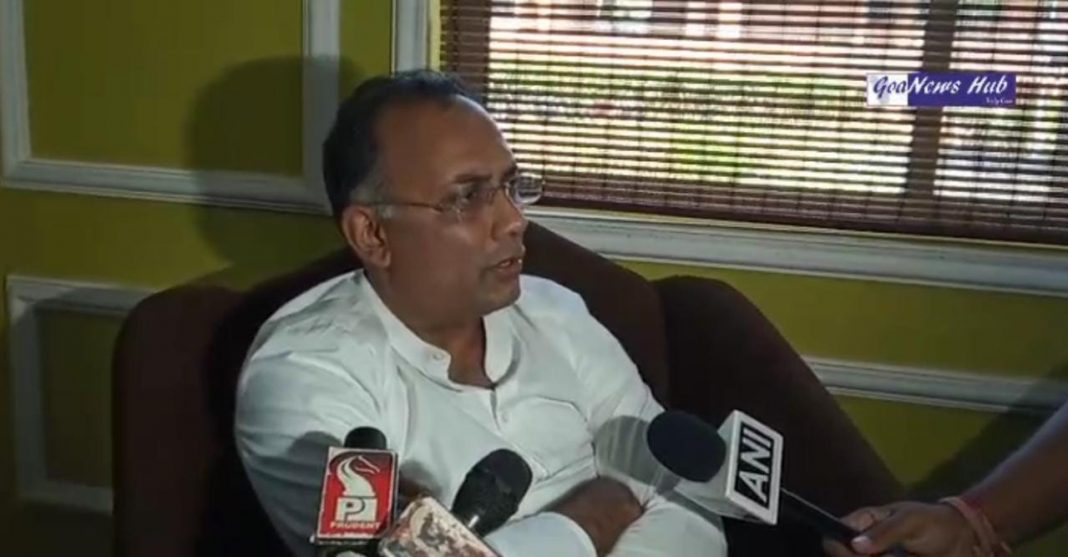 Congress’ Goa desk  incharge Dinesh Gundu Rao spoke exclusively to Goanewshub on the current situation of the party, resignation of Girish Chodankar and what’s going wrong in the party.

Will the resignation of Girish Chodankar be accepted?

Those issues would be ultimately decided by the party leadership, that is Congress President. Girish Chodankar has tendered his resignation. Now how to take it forward and what next steps needs to be taken, I will consult with other state leaders and party workers and than we will decide.

He has taken moral responsibility of ZP results and he has resigned. Success is always having many fathers and failure is an orphan. Why we went wrong in ZP election, there are many reasons, also because without any intimation election date was announced, BJP used huge money power, they gave promises like 10,000 jobs and resumption of mining.

There are many issues in Goa due to which Goans are suffering, we have to focus on that. I am sure we will be able to regain the lost grounds.

Who is responsible for ZP debacle?

Everything is a common responsibility. At the same time we have to sit together and work out way forward, we have to revamp many things, reorganize, workers should be given enthusiasm, and we should fight for people’s issues.

When someone wants to form the government at any cost. It has become BJP’s program to topple government, destabilize government, purchase MLAs, to threaten MLAs, blackmail them using IT, ED, CBI, they are using extreme measures.

Some of these people who have left us is shameful. It is betrayal of voters’ mandate. The voters had voted for them, because they were voting for congress and today they have betrayed the voters.

Who can win Congress ticket?

Next time when we give ticket we should be careful as to whom we are giving tickets to. That is going to be very important. Loyalty and commitment should also be an important.

Can Congress win back in Goa?

Congress is strong in Goa, and congress can win back Goa. For that Congress has to work out, work with unity and have right strategy. I don’t think ZP is anyway signal to next assembly election. you have seen so many elections for local bodies, that should not be a barometer. I feel we have to do lot of work. Congress cannot just simply sit down and expect people to vote for us, we will have to convince the voters and the voters want congress. But they want congress to work in a much better fashion.

Will Congress have alliance with like-minded parties?

I don’t want to make any comment on that. I am now concentrating on Congress House in order. Setting up stronger Congress organization and getting the leaders to reach out to the people. That is first aim, other issues, we have lot of time to discuss that. I don’t want to discuss it. My focus is that Congress becomes stronger.

No tickets to those who left Congress?

I have already said this before. My focus is to strengthen the congress. Those who have betrayed and gone, we cant consider them. My focus is that we have to become strong and have to convince the people that Congress will select good candidates, who will respect the mandate. We cant have candidate with people think that he will do what others have done before. People who are worthy of the mandate of the people are what we will select.

Indiscipline in the party

Discipline is paramount. However big or senior they are. Whatever issues that are discussed has to be done within the four walls. Going to the press and talking about it, is not at all a good thing and however senior they are, it is not reflecting good. We are going to take it seriously.

I have already spoken about. I don’t want to discuss it.

BJP does hypocritical politics. Today the farmers in Karnataka are suffering, on one side, government does not give any help to the farmers to look after their bull, cow, buffaloes, on the other hand, they say that you can’t sell them, than who is going to look after them. BJP should come out with a program in Karnataka wherein every buffalo, bull, cow is taken care by the government. Give a pension so that they are taken care of. Today population of cattles are reducing wherever these laws have become strict because nobody can look after them. While on one side North Eastern states, Goa, Kerala, they talk differently and for Karnataka, Maharashtra, they talk differently, what I am saying that if they are particular about it, let them ban the export of beef from India. We are the second highest exporters of the beef. Let Mr Modi should ban export of beef. If that happens, there would not be any cow slaughter.