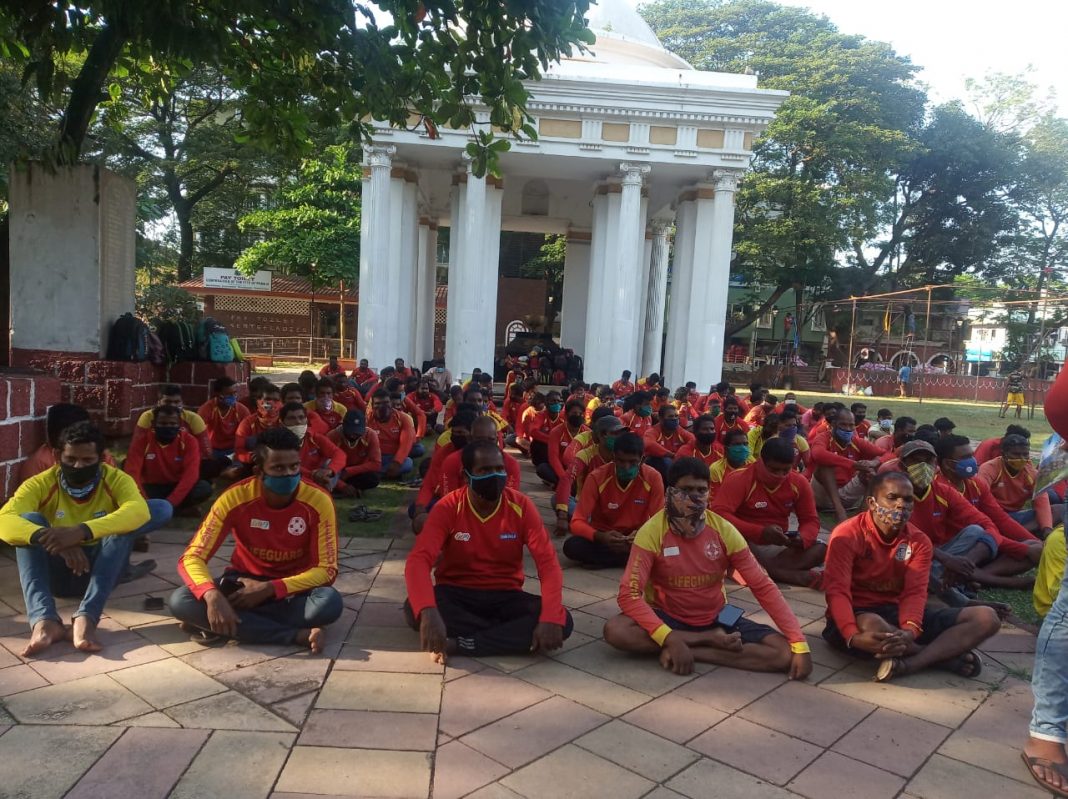 Panaji: The President of Goa Pradesh Congress Committee Girish Chodankar has demanded to regularize service of lifeguards, who are protesting in capital city Panaji demanding their rights, at earliest.

“These lifeguards put their own life to risk to save others, but in return what they are getting is ‘injustice’ from this government. The saviours should not be treated like this. ” Chodankar said.

Chodankar expressed his solidarity with the agitating lifeguards, under the banner All Goa Marine Lifesaving Guards Union, by meeting them on Thursday. Sanjay Sarmalkar and Swati Shet Kerkar were also present on the occasion.

Chodankar while supporting the agitating lifeguards sought intervention of the government to resolve the issue. “This government is doing injustice on everyone. But the government at least should pay heed to the demands of those who save the lives of others.” Chodankar pointed out.

“It is the duty of the government to protect the lifeguards, who put their lives to risk while saving others. I feel the government should immediately regularize them.” Chodankar reiterated.

According to Chodankar, Goa is a tourist destination and tourists throng on beaches for enjoyment. Hence, there is an absolute need of lifeguards on beaches. “Goa will lose tourism business if the government fails to deploy these lifeguards on beaches, which will send the wrong message in this area.” He said.

“This agency (Drishti-under which these lifeguards are engaged) takes money from the government although services are not given. This is happening only because the tourism minister is getting 30 per cent commission.” Chodankar alleged.

Chodankar said that corruption by this government is taking place in every field.

“Since last fourteen months lifeguards have been agitating. Still the government is doing nothing. But we the people of Goa are with them and we will always support them.” Chodankar said.

Sanjay Sarmalkar said that this government is insensitive and it is proved when the lifeguards issue is not resolved. “Lifeguards are saviors. Government should ignore their demands.” He said.