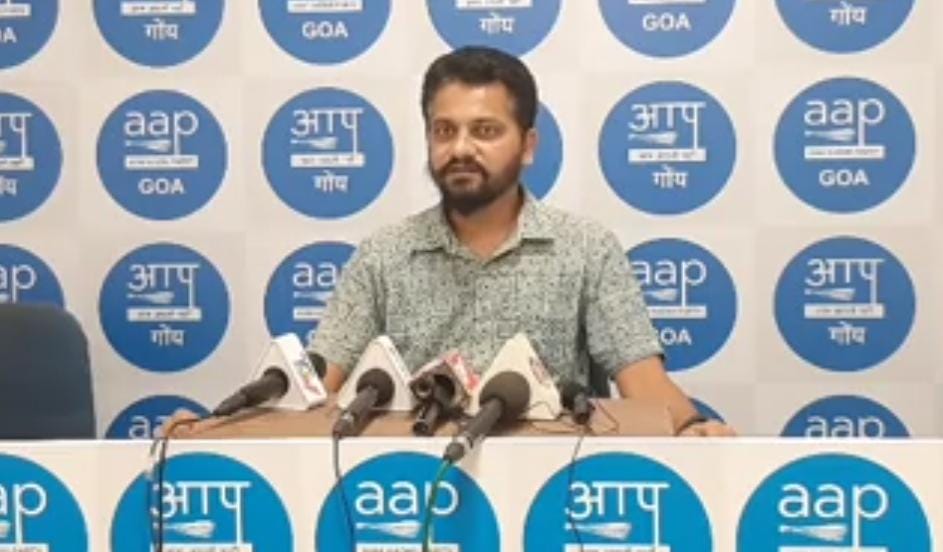 Panaji: Almost a day after the volunteers, activists and members of the Aam Aadmi Party (AAP) were arrested for holding a protest in front of the official residence of the Chief Minister Pramod Sawant at Altinho in Panaji, Adv. Surel Tilve, spokesperson and leader of Aam Aadmi Party, addressed a press conference in Panaji. In this media address, he posed 5 questions to the Goa chief minister on behalf of goans and has asked Sawant to give the answers of these questions to the Goan population.  Surel Tilve slammed Goa Govt. for not taking people in confidence while declaring three major projects in Mollem. “BJP is getting new projects but they do not want to discuss it with people because these projects are advantageous to Central Govt. and Adani.” said Tilve
AAP alleging that BJP wants to make a “Coal hub” out of goa has asked these questions to BJP Government
1. Why did you not ask Goans before allowing double track project for Adanis?
2. People feel that this project will not bring any benefit to Goans. Kindly name one benefit that Goans will have due to this project.
3. Are you personally, alongwith your family, willing to stay near the tracks to suffer the consequences of coal transport?
4. Why did you surrender the interests of Goans and put their lives and health at risk on the orders of Delhi BJP leaders? Does it now show that you don’t care for Goans?
5. What are your relations with Adanis? What are BJP’s relations with Adanis? How much have Adanis donated to BJP party and its leaders in last five years?
4) why is Goa sold to Adani
5) how much donation did BJP get from Adani
Surel reckoned that “people of Goa have fought many battles in the past and have made huge sacrifices to preserve Goan identity and culture. We Goans will not let that go in vain. Goa is for Goans, not for Adanis. Now Goans will decide the future of Goa neither BJP nor Congress”