Independent filmmakers must keep away from government funds: Mahnaz Mohammadi Kids remind us of the core values of humanity: Dev Pinn 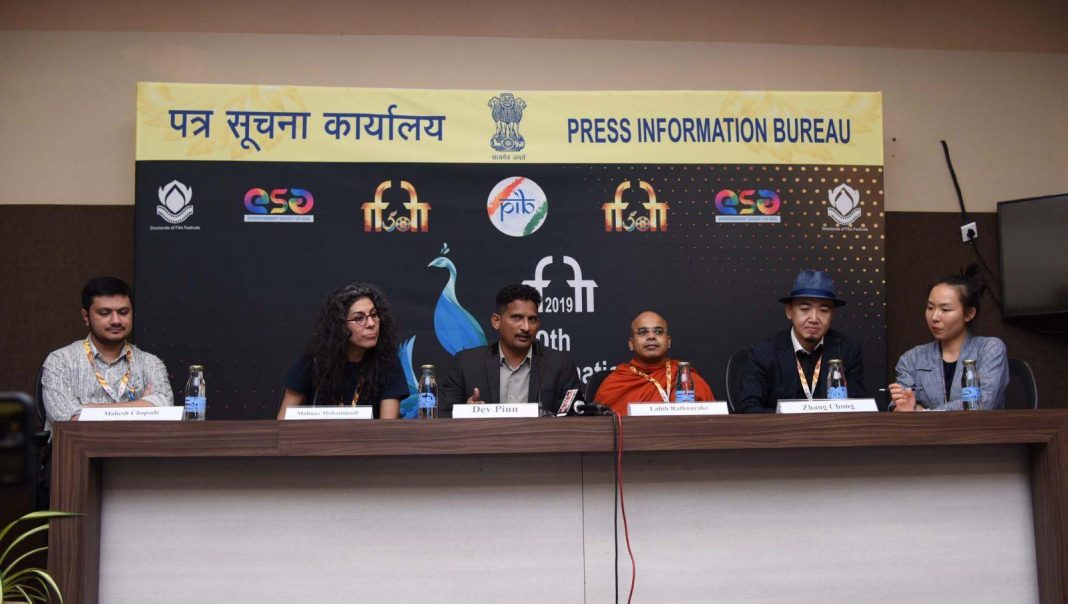 Those who wish to make independent films must keep themselves away from government funding, said Ms. Mahnaz Mohammadi, Director of Iranian film ‘Son-Mother’. “ The government will give funds to directors who follow their rules and listen to them. You have to be part of the system and norms. I used my earnings as a documentary filmmaker to produce my films”, she said. She was participating  in a media conference at the 50th International Film Festival of India, here in Panaji.

Director of  ‘I’m Gonna Tell God Everything’ Dev Pinn , Producer of ‘Other Half’ Aludeniye Subodhi Thero and Director of ‘The Fourth Wall’ Zhang Chong were also present.

Replying to questions about the acceptance of Iranian films across the world, she said, “Iranians grow up with poets. We need poems for every other occassion.  That might be the reason why people around the world find movies made by Iranians good”. Elaborating on her movie ‘Son-Mother’, the director said that the film talks about a working widow in Iran who faces an impossible choice whilst trying to keep her family together.

Sharing the incidents that prompted him to make a film, Director of  ‘I’m Gonna Tell God Everything’, Dev Pinn @ Vasu Pinnamaraju said that the film borrows its title from the last words of a 3 year-old Syrian boy in a hospital at Damascus. “ The movie deals with true events that occured in Syria between 2011 and 2018, and how human lives are at stake in one of the bloodiest times of the Middle-east”, he said. He also revealed his plans to make a feature film on the gun culture of America.

Underlining the theme of the movie, he added that when adults are overwhelmed by their selfish interests and needs, it is the kids that remind us of the core values of humanity.

Producer of ‘Other Half’ Aludeniye Subodhi Thero said that his film discusses the importance of transforming Srilanka’s teacher centred education system to a student centred one. Environmental concerns like the over use of chemicals for agriculture are also discussed in the film, he said.  Subodhi further said that art and cinema can be used to transform people for better and increase human value.

Director of ‘The Fourth Wall’ Zhang Chong said that he has been influenced by many genre filmmakers like Christopher Nolan. Talking about the Indian film market in China, the director said, “every season one or two Indian films and 10 films per year are released. Amir Khan’s films has a got a lot of followers in Chinese film market. Indian commercial films are also very popular in China.Culture wise it has a lot of similarities.”

Leila faces a crisis at work where jobs are at stake. Kazem, her colleague proposes marriage but Leila hesitates. Kazem has a daughter the same age as her 12-year old son, Amirali and Kazem tells Leila not to bring Amirali, until he marries his daughter off. After Leila is fired, she decides to stay with Kazem and leaves Amirali at a boarding school for deaf children. Amirali is forced to pretend he’s handicapped too, and tries to escape. But, Kazem asks him to think about his family’s future.

Based on true incidents that happened in Syria during the civil war between 2011-2018. Anis is a social activist who was the war to end. He gathers videos, photos and information about the brutalities in Syria and shares them with the world to get help. He lives in a remote house on the outskirts of Aleppo, Syria with his wife and children Samia. 7, and Yusul, 5. but soon becomes the target of the government as well as anti-government organisations. Will Anis be successful in his plans despite the odds?

In a Sri Lankan village, a family becomes poisoned through agricultural chemicals. This leads to the untimely death of Ruwansiri’s father. Ruwansiri leaves his mother and starts working to support the family. At school, he struggles to understand lessons which are being taught in a rigid educational system that cannot go beyond rote learning. As an escape from the environment, Ruwansiri finds solace in music. Can his passion help him overcome his circumstances? Well known Sri Lankan writer-director of TV programmes Lalith Rathnayake’s film The Other Half follows this story line.

Liu Lu is leading a dreary and seemingly mundane life working at a deer breeding farm. A friend, Ma Hai keeps trying in vain to win her affections. But it is as if she is isolating and banishing herself from any kind of human warmth or love. Ma Hai confesses he knows another Liu Lu and another herself in a ‘parallel world. The more she learns about the other ‘her’, the more Liu Lu uncovers about the long suppressed memories from her past.  Zhang Chong leads the viewers through this fantasy in his film The Fourth Wall.

Previous articleCalling for the widest and biggest participation of both filmmakers and film-lovers; taking efforts to expand the outreach of the festival, beyond Mumbai: Festival Director, MIFF
Next articleOpen Forum explores “how real are these reality based feature films”