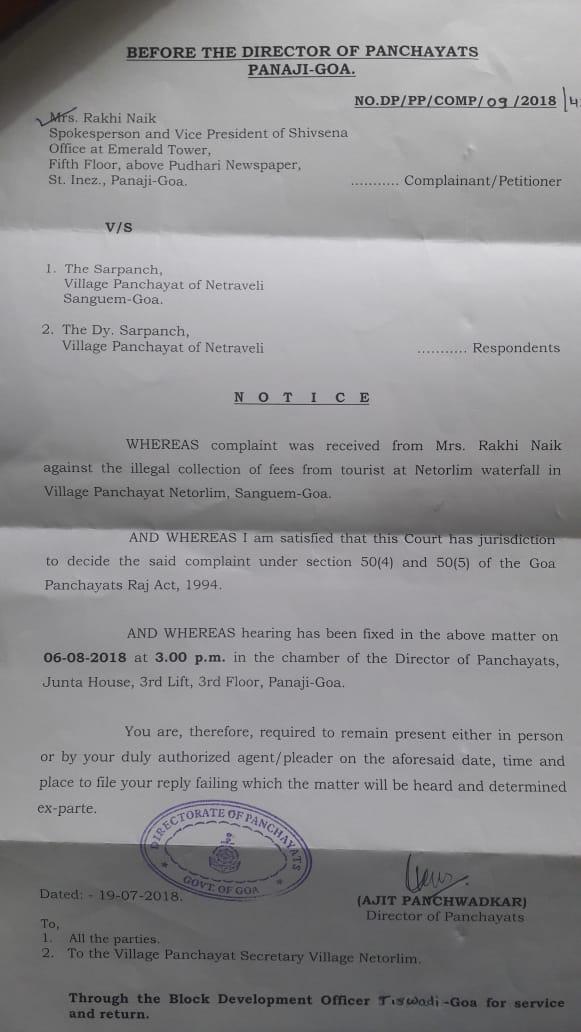 Panaji: After being named in two FIRs, Deputy Sarpanch of Netravali Panchayat Abhijit Desai is heading for another spell of trouble. Directorate of Panchayat has issued him notice under disqualification sections for allegedly illegally collecting fees from tourists at Netorlim waterfall in the village panchayat of Netorlim.

Director of Panchayats Ajit Panchwadkar has issued notice to Desai acting upon the complaint filed by Shiv Sena’s Vice President Rakhi Prabhudesai Naik. The Director has asked Sarpanch of Netorlim panchayat and deputy Sarpanch to remain present before it on August 06 at 3 p.m.

Whereas complaint was received from Rakhi Naik against the illegal collection of fees from tourist at Netorlim waterfall in village panchayat of Netorlim.  And whereas I am satisfied that this Court has jurisdiction to decided the said complaint under section 50 (4) and 50 (5) of Goa Panchayat Raj Act, 1994.

You are therefore requested to remain present either in person or by your duly authorised agent or pleader on the aforesaid date, time and place to file your reply failing which the matter will be heard and determined ex-parte.