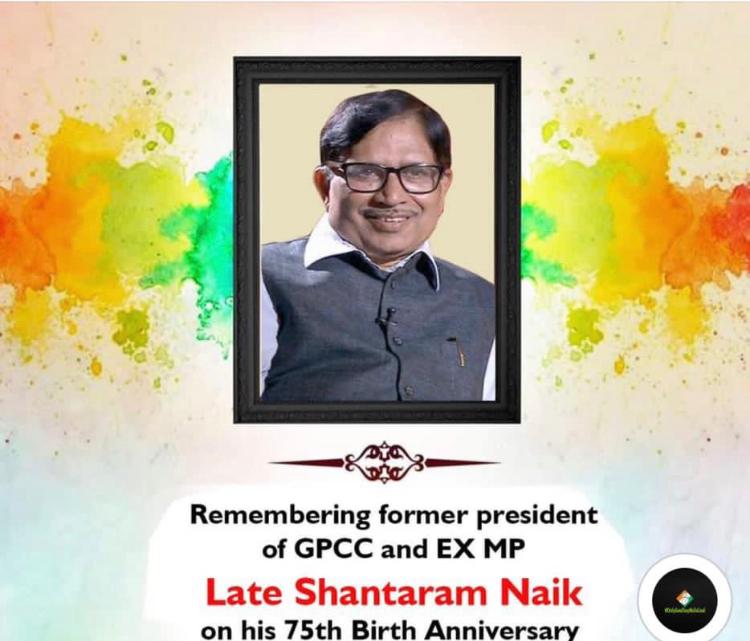 Margao – The contribution of former Goa Pradesh Congress Committee President & Member of Pariliament Adv. Shantaram Naik to Goa and Congress Party is immense. I remember and pay my tributes to the staunch Congress leader on his 75th Birth Anniversay said Leader of Opposition Digambar Kamat.

Born on 12th April 1946 in Cuncolim, he got initiated into politics as a student activist. He later joined Indian National Congress & remained loyal to the party till his last breath.

He received the title of “Hero of Zero Hour” in Parliament. He raised various issues concerning the People of Goa. He always worked to protect & preserve the Identity of Goa Digambar Kamat said.

He was elected as Member of Parliament to represent North Goa in Lok Sabha in 1984. He also represented Goa in Rajya Sabha for two terms.

He has a record in his name of introducing highest number of Private Members Bills during his term as Member of 8th Lok Sabha. He also pursued the demand for Statehood of Goa.

Late Shantaram Naik’s career is an example to all the upcoming new leaders and politicians. He utilised every opportunity in Lok Sabha as well as Rajya Sabha for benefit of his motherland Goa. He was always the Voice of Common Man Digambar Kamat said.

I shared a personal bonding with him and we had a very cordial relationship with each other.

I am happy that his wife Beena is continuing to take ahead his legacy as Mahila Congress Leader & I compliment his son Adv. Archit who is a active member of Youth Congress. I am sure Late Shantaram Naik will continue to inspire more and more youths in Goa which will also help Congress Party to strengthen its organisation at the grassroot level.

Previous articleCongress to remember its former Goa chief Shantaram Naik on his birth anniversary on Monday
Next articleFatorda Forward will bring excellence, innovation and character – Vijai