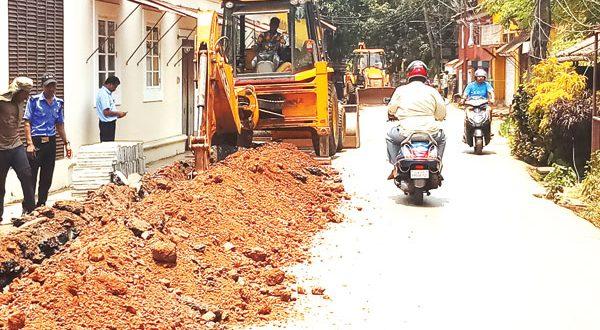 As directed by the North Goa Collector Mrs. R.Maneka the Deputy Collector Sagar Gawade today inspected the roads in Ribandar and will submit a detailed report on the complaint filed by Adv. Aires Rodrigues over the precarious state of the roads.

Adv. Aires Rodrigues today accompanied Deputy Collector Sagar Gawade along all the roads in Ribandar and pointed out to him that in the digging of the roads due to the sheer lack of coordination between the Panaji Smart City Development Limited and the other government agencies the water supply pipes and telephone cables were carelessly damaged on account of which Ribandar was without telephone service and water supply for almost a week.

Drawing the attention of the Collector that the Imagine Panaji Smart City Development Limited over the last four weeks recklessly dug the roads in Ribandar endangering the lives and property of the residents of the area, Adv. Aires Rodrigues in his complaint to the Collector last week had pointed out that in terms of the permission for digging issued all the roads in Ribandar were to be restored to its original condition by 17th of May.

Stating that in rank violation of the condition imposed the roads of Ribandar continue in a very precarious state, Adv. Rodrigues stated that that entire stretch of Ribandar is very densely populated and there is heavy traffic in the area with the roads being very narrow.

Pointing out that many dug up trenches have been left open, Adv. Rodrigues in his complaint also further stated that there is also a lot of debris lying along the roads posing a health and traffic hazard.

Adv. Rodrigues has demanded that stringent action be taken against   Imagine Panaji Smart City Development Limited and the contractor for gross dereliction of duty and for very high-handedly endangering the health and lives of the residents of Ribandar and the commuting public.

Meanwhile, the Goa Human Rights Commission has also sought a report by 29th May from the Chief Secretary, North Goa Collector and the Managing Director of the Imagine Panaji Smart City Development Limited on the complaint filed by Adv. Aires Rodrigues that the Human Rights of the residents of Ribandar are being grossly violated by the rank inaction of the authorities to the alarming state of the Ribandar roads which are currently in a very perilous state posing a grave danger to the pedestrians and commuting public.

Adv. Rodrigues also stated that as the monsoon was fast approaching, on account of the inaction by the authorities there could be a catastrophic calamity bringing untold miseries to the residents of Ribandar in gross violation of their Human Rights.

Stating that the Bombay High Court has held that good motorable roads was a fundamental right of all citizens, Adv. Rodrigues in his complaint has sought that the authorities be directed to explain their gross dereliction of duty and the very high-handed manner in which in violation of human rights they are endangering the health and lives of the residents of Ribandar and the commuting public.

Previous articleModel Code of Conduct withdrawn in Goa, across country
Next articleNewly elected MLAs to be sworn in tomorrow