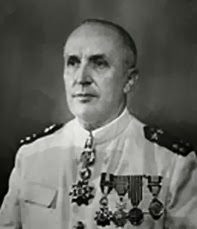 Panaji : 19 December is regarded as one of the most important days in the history of Goa. The day when Goa got independence from the tyranny of Portuguese. While the ‘armed action’, code named ‘Operation Vijay’ was launched against the Portuguese involving strikes by Indian Navy, Airforce, and Army for over 36 hours, we tend to forget the role of Portuguese in retaliating the attack. When operation Vijay was launched Manuel Antonio Vassalo E Silva was the portuguese Governor General of Goa.

Manuel Antonio Vassalo E Silva was appointed as the Potuguese Governor General of Goa Daman and Diu in 1958. During his tenure he undertook many developmental activities for the welfare of Goan public including free distribution of food and medicine, setting up for milk industries,public departments, primary and high school buildings. In 1960, he was the pioneer in establishing ‘A Junta Do Comercio externo (Board of External Trade) which helped Goa Daman and Diu in expansion of their trades.
Towards the end of 1961 december he had to face many challenging situations. The biggest challenge being Government of India had demanded that Goa be vacated from portuguese rule as it was an integral part of India. On 14 December 1961 the Portuguese Prime Minister Dr Antonio De Oliveira Salazar sent a message to Vassalo E Silva, “The attack on Goa by Indian govt is imminent hence, I order you to Move St. Francis Xavier’s  relic to Portugal, Move all the Portuguese airplanes to portugal, Destroy all the famous sites in Goa by bomb blast. If he fails to follow these orders the Goan Priest was given directions to remove Antonio Vassalo E Silva from his position as Governor General of Goa. He also faced the added danger of being court marshalled for not abiding by direct orders.
Interestingly Goa’s Portuguese Governor General did not follow any of these orders citing reasons as St. Xavier’s relics cannot be brought back to portugal as Goans pray to him in difficult times and they need the relics now than ever, secondly, airplanes cannot be sent back to portugal because they will come in great use to transport portuguese women and children to safety, thirdly, all important sites cannot be destroyed as they belong to the people of Goa who are dependent on them. Moreover they are attached to these places culturally.
It is because of Vassalo E Silva’s decision that Goa was saved from being burnt to the ground. “It is no surprise that even after 451 years of despotic Portuguese rule the tyranny was quickly forgotten because of Vassalo E Silva, Some Goans still cherish the memory of portuguese times” Says Adv Pandurang Nagvekar in his book ‘Gomantakachi Bakhar’.