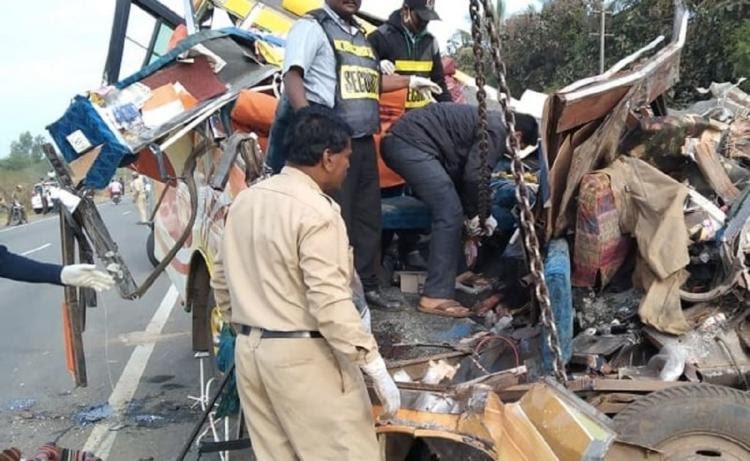 Ten women who were travelling to Goa on vacation and their driver were killed on Friday in a road accident in Karnataka’s Dharwad district after a minibus collided with a tipper truck along the Hubballi-Dharwad bypass near Itigatti. Among the deceased include the daughter-in-law of a former BJP MLA from Davangere’s Jagalur, Preethi Ravikumar. She is the daughter-in-law of former MLA Guru Siddanagouda. Dharwad Sub-urban Police Inspector Yaligar said that the accident took place around 8 am on Friday when the mini bus collided with the tipper truck, which was coming from the opposite direction.

A group of 16 women from Davangere, who were members of the Ladies Club, were travelling to Goa for a vacation, when the incident occurred. The Dharwad Rural Police said that the women had decided to visit the residence of their friend in Dharwad for breakfast and had decided to take a detour. The minibus was crossing the Hubbali-Dharwad bypass, when it collided into the tipper truck as there was not enough room on the road to maneuver, Inspector Yaligar said.

The driver of the minibus along with 10 women in the minibus died on the spot, the police said. The deceased include the driver Praveen, and the 10 women including Asha, Meerabai, Paranjyoti, Rajeshwari, Shakuntala, Usha, Veda, Veena, Manjula, Nirmala, Rajaneesh, Swati and Preethi Ravikumar. Five women and the driver of the tipper truck have sustained critical injuries and are currently undergoing treatment at KIMS Hospital in Hubballi.

The 32-km Hubballi-Dharwad bypass is a single lane located along NH 48 between Bengaluru and Pune. Inspector Yaligar said that the residents of Dharwad had been complaining of the bypass being dangerous as the stretch is narrow and that it was not being used as a one-way. He said that the road widening work had been delayed for the last few months due to differences between the contractors and the government. “An accident case has been registered. We are still investigating the case,” he added.

Prime Minister Narendra Modi condoled the death of the 11 people. In a tweet, he said, “Saddened by the loss of lives due to a road accident in Karnataka’s Dharwad district. In this sad hour, my thoughts are with the bereaved families. I pray for a quick recovery of those injured.”