Why is CM forcing 16 lakh Goans to consume coal, when he can’t stand a pinch of it? : AAP 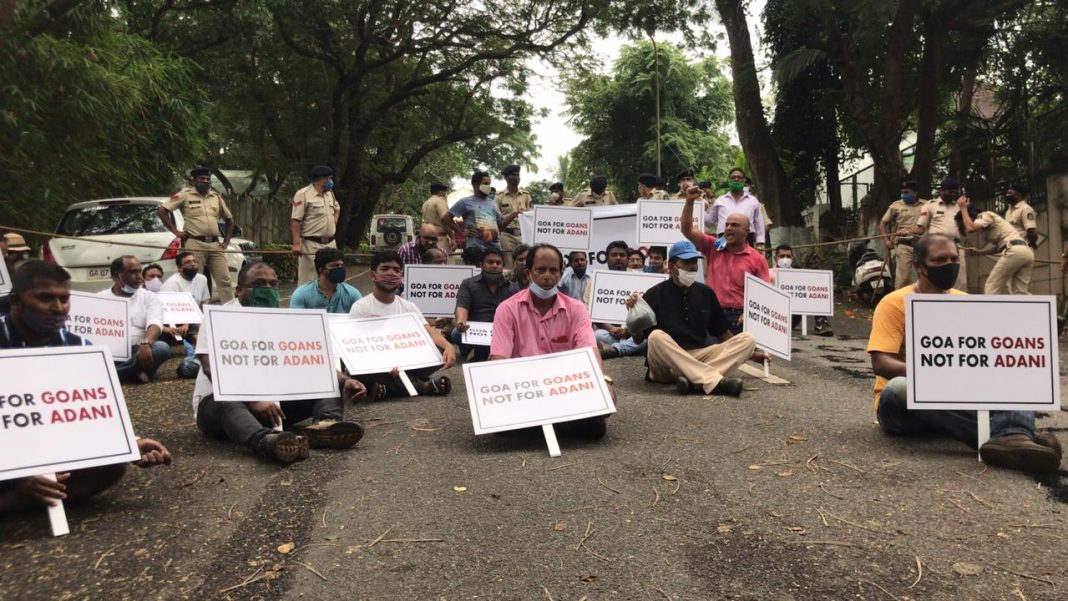 Panaji: The Aam Aadmi Party (AAP) leaders and volunteers were forcefully detained by Goa Police after they staged a protest at Chief Minister’s residence at Campal in Panaji. The leaders and members of the party were forcefully stopped near the gate and were not allowed by the police to meet chief minister Pramod Sawant when they expressed their willingness to do so. AAP members, activists and volunteers shouted slogans at the venue for around half an hour. AAP convenor Rahul Mhambare and activist and member of AAP Sandesh Telekar got into an arguement with some police when the latter said they need to take an appointment to meet the Chief Minister Sawant. Mhambare quickly replied, “Did CM took appointment of people when he came to meet people asking for votes? ” Slogans went “Setting, Setting, CM fotting”(‘this is all setting, chief minister is a liar’) and “Amka zaay, aamka zaay Sobit Goy aamka zaay” (we want green Goa), “Goyant kolso aamka naka”( we don’t want coal in Goa). Sandesh Telekar said that we (AAP volunteers) have peacefully come to meet the Chief Minister. 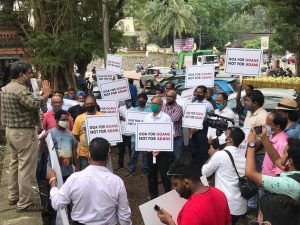 Telekar even told the police that all the people and even the police will have to breath the air polluted by coal. “If chief minister Sawant is pushing 150 million tonn is going to be brought in Goa, then why he isn’t ready to get a feel of it? Asked Telekar. AAP volunteers were carrying a small bag of coal to hand it over to the chief minister as a gift. Rahul Mhambare said, “If he (Sawant) is dumping coal on the 15 lakh population of Goa, why isn’t he ready to get the feel of a pinch of it? ” The police stopped the convenor and activists from carrying the coal bag to the CM’s residence. Police agreed to hand over the memorandum to the chief minister. Mhambare further told the media present near the scenario, “last time, we visited the CM residence and handed over Oximeter to CM Sawant as we were concerned about his health. Now when he is gifting the whole state’s population with million tonnes of coal, we have come to gift him a pinch of it. But he is not ready to accept even a pinch of coal. Then why so much coal dumped on Goans”. He further added, “We have come here to give memorandum to him and clearly tell him, ‘Goa is for Goans. Not for Adanis’. Why Sawant is scares of this? ” An activist questioned, “CM says Congress party brought coal in Goa in 2012. But now, who is bringing coal in Goa?” The AAP convenor Mhambare, members Sandesh Telekar, Venzy Viegas and others were present during to protest. They asked the police officers to allow them to meet the Chief Minister Sawant but police did not allow them. All the volunteera, activists, members along with Convenor Mhambare, Telekar, Venzy and others were forcefully detained and taken to Agassaim police station later.

Previous articleBJP must apologise for insulting remarks on Goan diaspora across the globe – Digambar Kamat
Next articleOne arrested for theft outside mall in Vasco, items worth Rs 57000 seized