Was Mhadei up for ‘political sale’ until Goa objected? 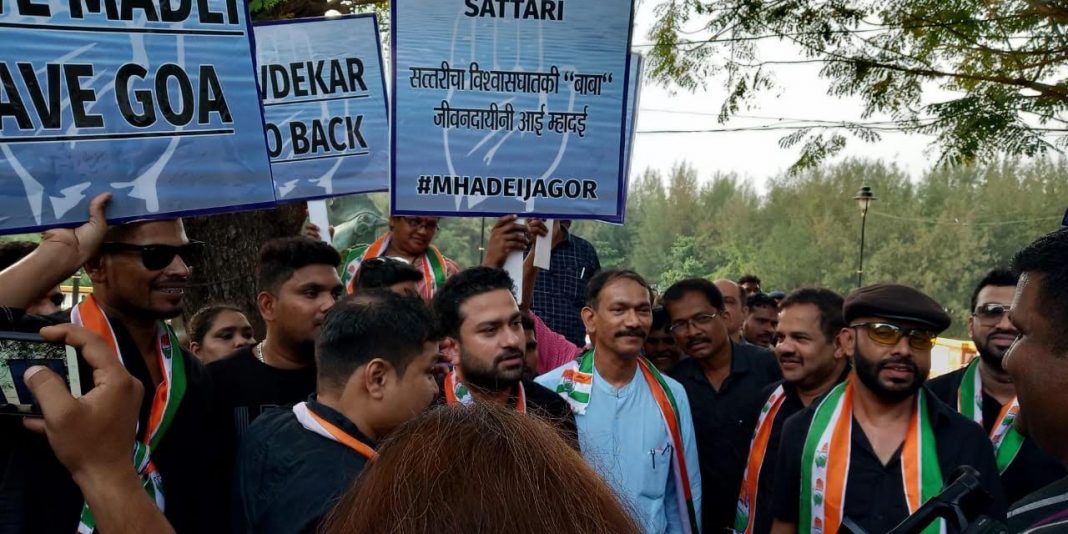 Correct me if I am wrong, but never before we have witnessed section 144 being imposed in Goa for such a long period. The reason still stands unclear especially because it’s been more than two weeks since the verdict in Ayodhya land dispute was delivered.

Yesterday, when Environment Minister Prakash Javadekar entered Goa, we could see Congress, Goa Forward and some NGOs gearing up to greet him with protests and that is what was followed. Now again, ours being a peaceful state, this situation was another unprecedented one. Some leaders were warned on the pretext of section 144.

My point here is: What is all this leading to? The controversy over Mhadei water dispute is refusing to die and rightly so. The water of Mhadei, caters to 43% of Goa’s population. Entire North Goa and some parts of South are dependent on its flow. Now, Karnataka is trying to divert large stream of flow through its evil plan of building KalasaBhandura dam. Goa has challenged this but Centre almost gave it away.

At least, this was what suggested through MoEF Minister Prakash Javadekar’s initial tweet on October 23rd this year that spoke of environmental clearance for building KalasaBhandura dam. It took netizen’s outrage for Chief Minister PramodSawant to react and acknowledge Centre’s disastrous plan.

Everyone went into a huddle. The Minister had to subsequently delete the tweet that almost revealed the plan.

The Minister-in-charge who is currently in Goa to celebrate the grandiose event of IFFI says the matter has gone for a review. But what does it mean?

Can we assume that river Mhadei was up for sale for political gains in Karnataka until public outcry? If the matter is subjudice, then why does the Centre need to review and take the decision in the first place?

IS THE MATTER BEING BLOWN OUT OF PROPORTION?

Perhaps, the most apprehensive part of all this is, the Chief Minister claims he was completely unaware of what was going on at the Central level. Following the protests at home, under pressure he took the all-party delegation to Delhi. Ex-Ministers including Rohan Khaunte and VijaiSardesai called it a mere ‘eye-wash.’ The delegation they claim could deliver a little before they Centre.

While Chief Minister has been giving repeated assurances to Goans and the opposition parties here, in Karnataka the situation is right opposite. Karnataka’s leading daily, Deccan Herald in its article (dated: Nov 19th) stated that the Centre has refused to withdraw the letter that gave the nod to Kalasa-Bhandura project but committee will be formed to assess the demands made by Goa’s all-party delegation. The header of the article calls it ‘a snub to Goa Government.’

We must also remember that mid this year Karnataka Chief Minister BS Yeddyurappa and Union Minister Prahlad Joshi had proposed Chief Minister PramodSawant to agree to an out of court settlement vis-a-vis the water sharing dispute. Goa, however, had dismissed any such plans. But Javadekar’s tweet almost blew the lid of alleged plan being hatched behind Goa’s back.

FATE HANGS IN BALANCE FOR GOA?

Now what does it indicate, we are heading for another clash. How much assurance can rely on? If the withdrawal of the nod is still hasn’t been revoked, then shouldn’t we all be worried.

Why can’t the Centre await the judiciary’s decision? What is the haste? Amidst the whole confusion, the key question is, are the voices from the opposition in Goa- may it be political parties, NGOs or activists questioning the Government on the issue being stifled under the prohibitory orders that are still in place?

Deepali Desai is a independent journalist. She has had over 9 years of experience working with India’s top TV news channel including Times Now, NDTV and NewsX