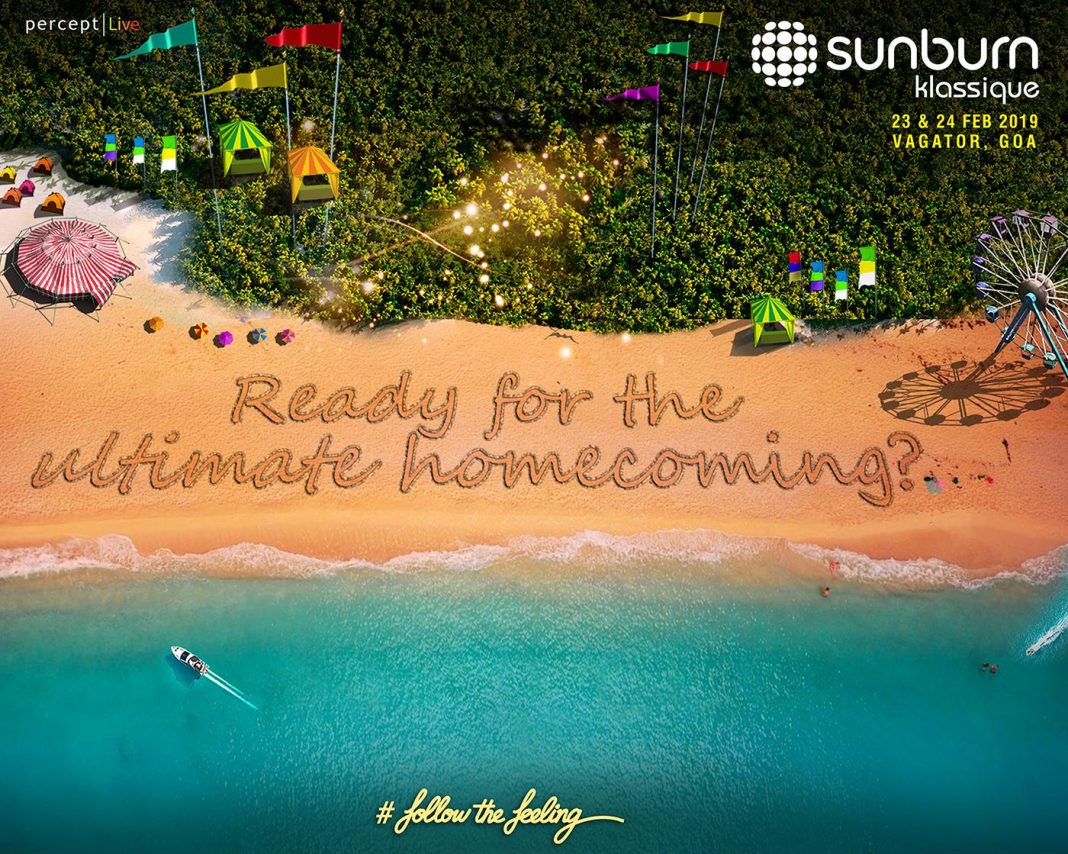 Panaji: Percept Live recently announced the homecoming of Asia’s largest dance music festival, Sunburn to Goa in collaboration with Klassique events represented by Shailesh Shetty. After a hiatus of over 3 years, the festival giant name for nearly a decade. Fresh off the success of their latest dance floor anthem ‘American Dream’, theforward thinking electronic duo’s return to Sunburn after 7 years will be making its grand return to its birthplace.

Spanning over two days, a brand-new format “Sunburn Klassique”will be held on the 23rd and 24thof February 2019 at Vagator, the venue where the festival was first hosted in 2013. Sunburn which enjoys an undisputed monopoly in the music festival industry recently concluded its 12th edition of its annual showcase in Pune and enters its 13th year in 2019.

Making his return to Sunburn in Goa after 2015 is the best live act in the DJ circuit, KSHMR. Ranked #19 on DJ Mag’s 2018 list of Top 100 DJs, KSHMR has been making India proud by taking his heterogeneous sound to different parts of the world, and has been hailed by many, as a champion of his immersive cinematic sound. The forever achieving diligent record producer, Niles Hollowell-Dhar from Berkeley, California with deeply seated Indian roots has been a festival front-runner.

Having headlined Sunburn way back in 2013, the German-born, but Miami-based DJ Markus Schulz who won the DJ Times‘ America’s Best DJ for an unparalleled third time, will be sampling some of his signature hybrid trance sound he is responsible for with spine-tingling melodies and outrageous basslines.

Trance fans can exult as Dutchman Richard Durand who visited Sunburn in 2012 will be  dropping some adrenaline pumping baseline from his album ‘The Air We Breathe’ which he released recently after a 6-year hiatus.

Canadian Jonny White, acting Head of No.19 Music, Art Department will return to Sunburn once again after 12 years. The prolific producer’s original style landed AD at the forefront of a major underground music movement, transcending genre barriers and breaking down walls as few other underground artists have. Their game-changing contribution to the electronic music landscape has been undeniable, garnering accolades such as ‘#1 Track of the Year’ at the Beatport Awards, the iTunes #2 ‘Best Electronic Album’, hailed as the “hottest duo in dance music” by DJ Mag, awarded the ‘Track Of The Year’ by Resident Advisor (UK), Groove Mag (Germany), and #2 in Mixmag (US), and voted #6 Top DJ’s in the world.

Live electronic act, composed of Kalden Bess and Jessica Abruzzese, UNDERHER who describe their music as “music to have sex to” will ensure dark, twisted fantasies meet a controlled reality with their immersive set.

Liquid Soul, the solo project of Swiss artist Nicola Capobianco, with more than 100 hypnotic tracks and a best Beatport artist and a best Beatport track acclaim under his belt, has undoubtedly paved the way for progressive psy-trance landscape and will showcasing some of his hard hitting sounds.

Ever since Mandragora, one of the most undisputed names in Brazil, released his first track, fans have been bewildered trying to catalogue him. The people that know him closely say he can produce a complete album in one weekend!

Making his India festival debut, the mysterious house music producer, Claptone with his signature golden mask with a beak is one of the highest- placed house DJ in the Top 100 DJs Poll who curates The Masquerade events everywhere from Ibiza to Amsterdam to Melbourne.

Previous articleHuman mind can overcome any disease: Parrikar
Next articleThere will be political crisis if Parrikar steps down: Lobo