Siridao-Palem villagers objects to demarcation of HTL in Khazan lands and around salts pans, etc in draft CZMP 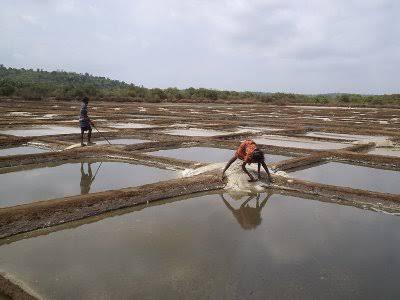 Panaji: The villagers of Siridao-Palem panchayat have raised strong
objection to demarcation of High tide line in Khazan lands,
demarcation of Khazans as mangroves and demarcation of HTL around Salt
Pans, Aquaculture ponds, rice fields and Fish Breeding Estuaries in
the draft coastal zone management plan (CZMP) of their village.
The villagers wants government to approach MOEF&CC with a request for
necessary amendments to the CRZ notification 2011 to exclude HTL from
Khazan land considering Goa as a special case.
The villagers led by Father Valerian, Parish Priest, has submitted a
memorandum to the State Environment department in this regard.
“It is surprising that the  High tide line has been demarcated by
National Centre for Sustainable Coastal Management (NCSCM) beyond the
sluice gates. NCSCM clarifies that their demarcation is as per
notification which now defines high tide line as salinity
concentration of 5 parts per thousand and the aspect of rise and fall
of water level is not of much consequence,” they said in the letter.
“Demarcation of HTL around khazan lands will not only mean loss of
agriculture land but a loss of centuries old heritage, which is unique
to Goa and especially to Siridao- Palem. With the help of the
Government, when the breaches in the bunds are repaired, the Khazan
lands, paddy/ rice fields will be cultivated, reviving the farming
practices, and producing the much needed grain and other foods,” they
said.
“The State Government should strongly recommend to the union
government to notify suitable amendment to the special provisions for
Goa and resolve this issue,” they demanded.
“We would like to highlight that with the demarcation of HTL in
khazan land around  mangroves and around salt pans and aquaculture
ponds, most of the area of the village is under CRZ as there is NDZ
beyond HTL. Therefore the HTL should be demarcated along the bunds and
not around mangroves in khazan and around aquaculture ponds, Fish
Breeding estuaries, paddy fields and Salt  pans,” villagers said.