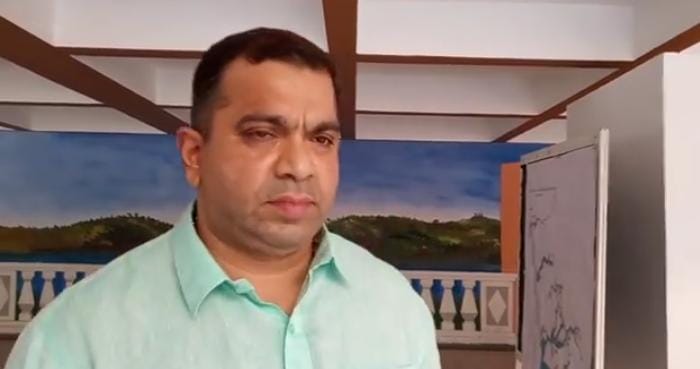 Panaji: Porvorim MLA Rohan Khaunte on Sunday lodged his protest the way the entire issue of Coastal Zone Management Plan has been handled by the government, keeping at bay the public at large.

Khaunte who expressed his dissatisfaction in front of the panel also demanded that the plan should be finalized “only after taking people into confidence.”

The Porvorim MLA said that the State government has got into a habit of winning the things by cheating, which they are even emulating in finalisation of such an important land use document.

Khaunte pointed out that the suggestions and objections given by Penha de Franca Panchayat for the earlier CZMP do not reflect in the recent draft.

Talking to reporters, Khaunte said “I have laid the protest in the way they have carried out the hearing. People are kept out and hearings are held. It is condemnable.”

“It is important that Government of Goa realise that they are fighting with the environment,” he said adding that the state government has already compromised with Mahadayi while is all set to bring in coal to pollute the air of the coastal state.

He said that the public hearing for CZMP should have been more organised, and be held at village level.

Khaunte said that in the area of Penha de Franca panchayat, there are port lines, which has suddenly developed. He also pointed out that the Salt Panes along Patto near Panaji have been reclassified from CRZ I into CRZ II.

“ Government needs to act and react. I totally support voice of the people, which was raised in the morning.I have lodged my protest and I have voiced my opinion. I have condemned the public hearing.”

He also said that the legality of the hearing is in question as it is being held when state is going through Code of Conduct due to municipal election.