Pandey who had checked in a five star hotel at Sinquerim in North Goa was detained by team of Calangute Police on Thursday afternoon and later handed over to Canacona police. 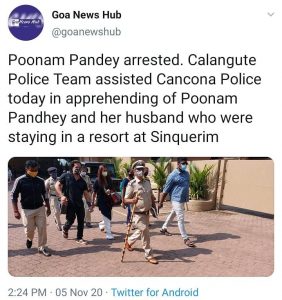 Superintendent of Police (South) Pankaj Kumar Singh said that the actress was “detained for questioning”. He said that after questioning, it would be decided whether she needs to be arrested or not.

An objectionable video clip of Pandey shot at Chapoli dam, a property of State Water Resources Department, had gone viral after which the locals from Canacona had resorted to shut down of the town on Thursday. The locals were demanding immediate suspension of policemen, who allegedly provided security to the crew members and Pandey during the shoot.

State WRD  had filed a formal complaint with Canacona police against unknown accused. Police had booked Pandey on Wednesday after identifying her in the video.

The Canacona residents had called for shut down of the town demanding action against the police officials on Thursday. Former State minister and BJP leader Ramesh Tawadkar said that the police had provided protection to the shoot.

He said that the shut down was called off after chief minister Dr Pramod Sawant assured that the policemen would be suspended. “Later, the wireless was sent ordering suspension of PI Tukaram Chavan and a constable,” he said.