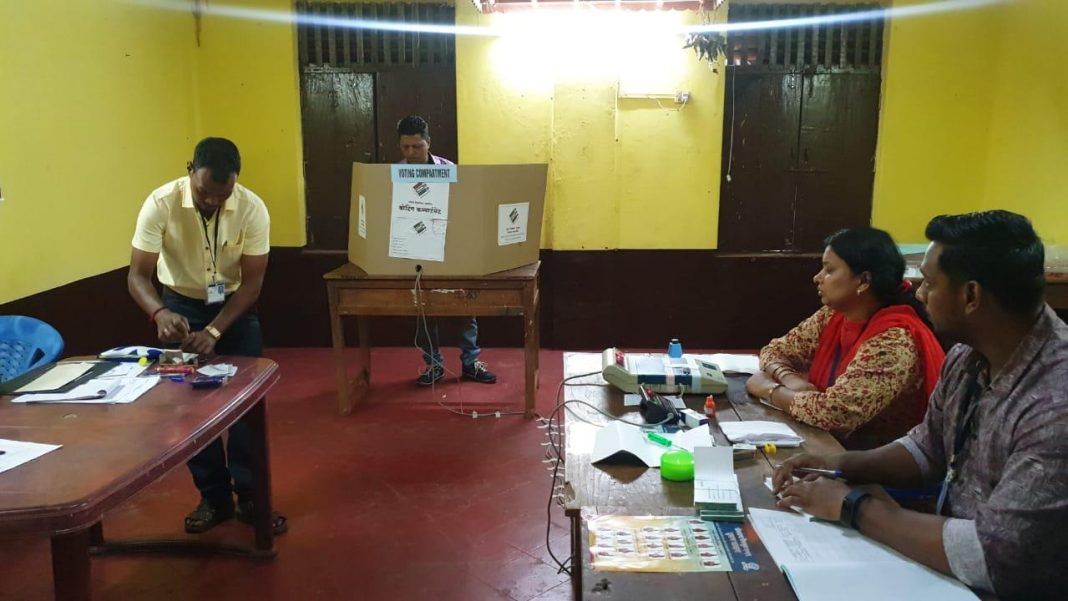 Panaji: The polling process for two Lok Sabha Constituencies and by-polls for three Assembly constituencies in Goa began at a peaceful note.

State is going for voting in two Lok Sabha Constituencies and three assembly constituencies including Shiroda, Mandrem and Mapusa.

The voting will be conducted over around 1,600 polling booths where more than 11 lakh voters will exercise their franchise.

All the main national political parties – BJP, Congress, AAP and Shiv Sena are in the fray for the elections along with regional outfit – MGP which is contesting only in Shiroda Assembly constituency.

There are 12 candidates in the fray for the two Lok Sabha constituencies and 18 for the three Assembly seats.

The by-elections in Shiroda and Mandrem were necessitated after their sitting Congress MLAs resigned andjoined the ruling BJP. The Mapusa seat fell vacant following the death of its sitting MLA.

Suspension of mining and fall in tourism revenue are some of the issues on which the ruling BJP and opposition Congress in the coastal state traded charges during the campaign.

The BJP has fielded its sitting MP and Union AYUSH Minister Shripad Naik from North Goa against state Congress chief Girish Chodankar, while the AAP has nominated its state general secretary Pradeep Padgaonkar from the seat.

During the poll campaigning, the state chief electoral officer received several complaints, including against a Christian priest, for violation of the model code.

The Election Commission gave a clean chit to AAP leader Arvind Kejriwal after a complaint by a local BJP leader that he tried to incite religious sentiments and create fear among the state’s Muslims and Christians.

After the enforcement of the model code of conduct, flying squads seized cash, liquor and drugs worth around Rs 2.8 crore across the state.

The polling booths in the state will be guarded by the state police and paramilitary forces, an official said.

People are enthusiastic that a worker has become the CM: Pramod Sawant

I will get more votes than the last time: Shripad Naik

Previous articleAs Goa votes, we capture, live, differed live, genuine
Next articlePeople are enthusiastic that a worker has become the CM: Pramod Sawant