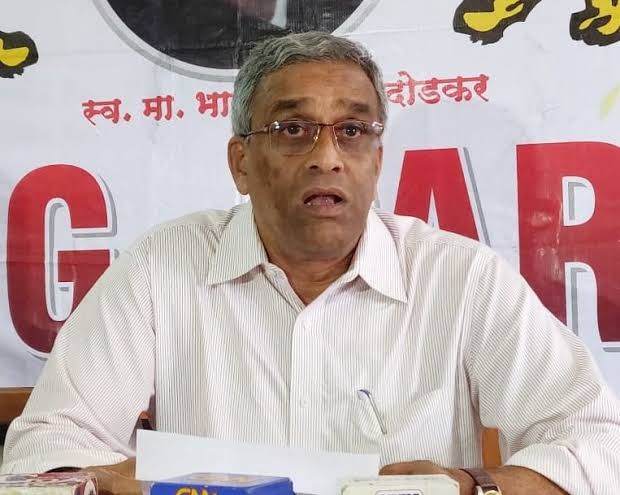 Panaji: The decade old love and hate story between Bharatiya Janata Party and Maharashtrawadi Gomantak Party took another twist on Saturday when Sudin Dhavalikar was inducted in the Pramod Sawant-led cabinet.

Both the political parties have been having face-offs often during the last decade from the time they formed the pre-poll alliance in the year 2012.

The inclusion of Sudin Dhavalikar in the Pramod Sawant-led cabinet is yet another twist in their relationship, which was severed during the recently held Goa Legislative Assembly election.

MGP and BJP had contested the 2012 Goa Assembly election in a pre-poll alliance in which both the parties together had won 23 seats. While BJP’s aggressive campaign led by Manohar Parrikar resulted in victory on 21 seats, MGP was on two.

BJP had included MGP in its 2012 Parrikar-led government though the saffron outfit had enough numbers on the floor of the House. Sudin Dhavalikar and his younger brother Deepak Dhavalikar, both of whom were the MLAs, were inducted in the State cabinet.

Parrikar’s promotion to the centre as Union Defence Minister and selection of Laxmikant Parsekar as the chief minister saw MGP and BJP relations running into troubles. Not being able to tide over the differences, in the year 2014, Parsekar had sacked both Dhavalikar brothers from his cabinet.

Two years later, the MGP contested the 2017 election in alliance with Shiv Sena and other non-BJP outfits. The party won three seats but was quick enough to support the BJP-led government which had Manohar Parrikar as its chief minister.

The relationship between MGP and BJP which went well till the demise of Manohar Parrikar in the year 2019 soured in the same year.  MGP fielded its candidate in the by-election for Shiroda Assembly constituency against BJP. That was a turning point in their relationship. Chief Minister Pramod Sawant dropped Sudin Dhavalikar from the cabinet.

In the press conferences held thereafter, Sudin Dhavalikar had vowed to never form a government with BJP claiming that it would be a “political suicide” to support them.

The differences continued in the year 2022 when  MGP  contested recently held Goa Assembly polls in alliance with Trinamool Congress Party (TMC), a new entrant in the political space of Goa. The grand alliance between Goa’s oldest regional party and state’s newest entrant was announced with much fanfare in presence of West Bengal Chief Minister Mamata Banerjee.

Both the parties had projected their alliance as an anti-BJP front to provide an alternative to Goa.  While MGP won on two seats – Sudin Dhavalikar (Madkai) and Jit Arolkar (Mandrem), the TMC could not open its account in Goa.

Little before the results of Goa Assembly polls of 2022, Dhavalikar had claimed that he would be a kingmaker to form the next government and would never support BJP and moreover Pramod Sawant as the next chief minister.

Incidently, after the results, MGP became the only political party to tender its unconditional support to BJP led by Sawant, which had staked to form the government before Governor P S Sreedharan Pillai.

Dhavalikar was inducted in Sawant-led government on Saturday and he became the first non-BJP minister to take the oath of secrecy in a function held at Raj Bhavan.