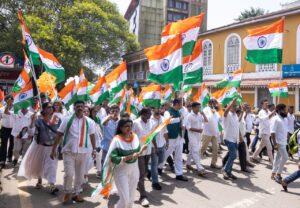 It is due to vision of our leades like Mahatma Gandhi, Pandit Nehru, Sardar Patel, Lal Bahadur Shastri and others that India could get Independence & the nation could progress fast, Amit Patkar said.

He said that no one will be able to tarnish the image of Pandit Nehru and other Congress Leaders by creating false and fabricated narratives.

Most of the milestone policy decisions in Socio Political Sectors, Science & Technolgy, Sports & Culture, Heath & Agriculture were taken by successive Congress Governments. No political party can deny the role of Congress in significant progress of India, stated Working President & MLA Yuri Alemao while addressing the gathering.

South Goa Member of Parliament Francisco Sardinha in his speech urged the people to pass on the great history of India to next generation and place before them fact & figures.

In the morning, Flag Hoisting was also done at Congress House by President Amit Patkar and other Office Bearers & Workers.

A documentary on “75 years of India” was shown and patriotic dance performances were also presented during the event.