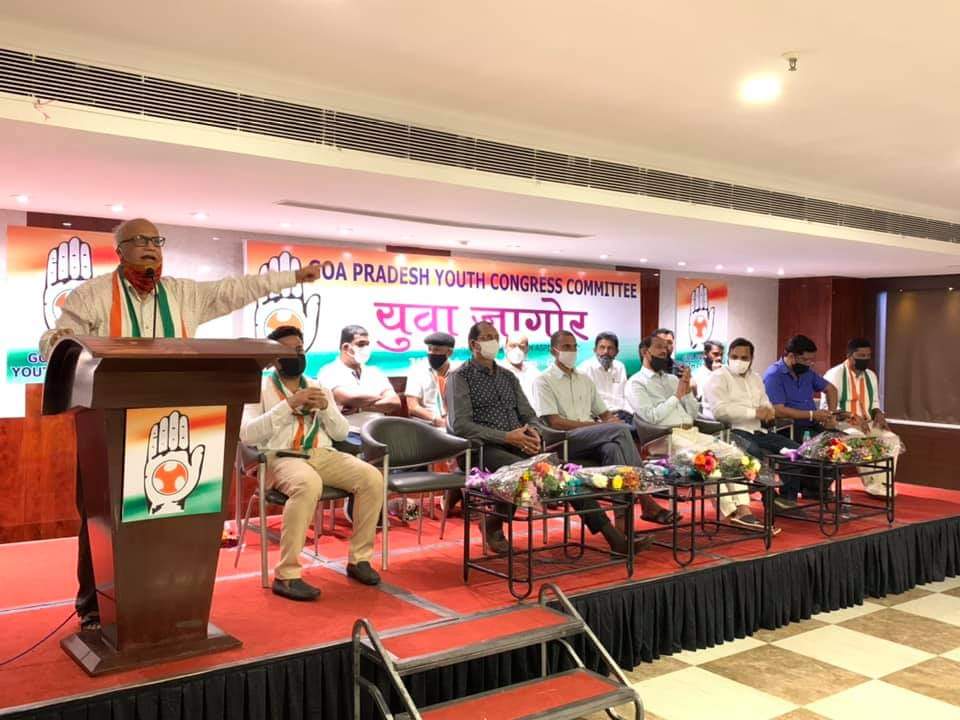 The GPCC president appealed to youth congress members to go on a mission of “One Booth Five Youth” in runup to the Assembly Elections of 2022 in order to combat two key issues of unemployment and drugs.
Emphasising that it was the Konkani language agitation taken up by the Youth Congress Party in Goa which brought him into Congress family Chodankar stated that today because of the democratic system in the party, a grassroot level activist like his is now heading the Congress Party in Goa.
Speaking on the occasion, AICC incharge of Youth Congress Krishna Allavaru strongly criticised the Modi Government at the Centre for its failure to provide employment to the youth. He said Youth Congress in Goa must work towards identifying job opportunities for the youth and ensure that the same are implemented by the Congress Government after coming to power in 2022.
Yuva Jagor organised by the Youth Congress will ignite each and every youth of Goa and I want to state on record that the Awakening of Youth will ensure that the divisive, incompetent and insensitive BJP Government is defeated and people friendly Congress Party will emerge victorious stated Leader of Opposition Digambar Kamat. He complimented the Youth Congress team for their relentless  efforts in launching various protests and agitations against the faulty policies and anti-people decisions of the BJP Government.
South Goa MP Francisco Sardinha while addressing the youth also lauded the Youth Congress for organising the Yuva Jagor and said that Congress Party always recognise the efforts of the youth congress who will emerge as future leaders of Goa.
Youth Congress president Varad Mardolkar informed that the party is now gearing up to mobilise the people of Goa against the anti-people policies of BJP Government. “I appeal to my Youth Congress cadres to be more vigilant and make themselves available for the party activities to ensure that Congress wins with absolute majority in the next assembly elections and come back to Power,” Mardolkar added.
All India Youth Congress Incharge for Goa Akhilesh Yadav while addressing the youth congress said that it is high time to change the government of intellectually bankrupt Dr. Pramod Sawant who waters plant standing in heavy rains. Expressing confident on Youth Congress workers, he said that Congress Party will emerge victorious in 2022.
GPCC Vice President Sankalp Amonkar, General Secretary and Youth Incharge Janardhan Bhandari , GPCC General Secretary Amarnath Panjikar spoke on the occasion and complimented Youth Congress team for their activities and appealed to the Youth Congress members to spread awarness amongst people about ill effects of drugs and other bad habits. They said youth must remain away from bad habits and always follow ethics and principles of life to be good citizens.
Conclave began with offering tributes to Sardar Patel and Smt. Indira Gandhi. Youth Congress members Archit Shantaram Naik and Vivek D’silva compeered the function.
Youth Conclave was attended by former MLA Agnelo Fernandes, Pratap Gauns, former Chairperson of Mapuca Sudhir Kandolkar, St. Cruz leader Rudolf Fernandes and other Congress Office bearers. Function was largely attended by elected office bearers of youth congress.
- Advertisement -